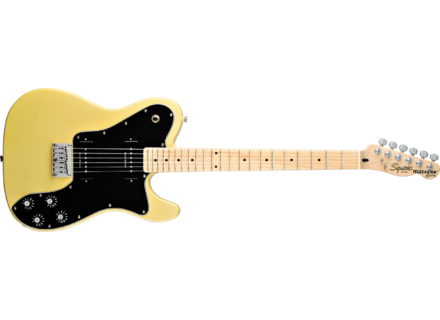 View other reviews for this product:
The Squier Vintage Modified Tele Custom II is a take on the classic redesign of the Tele that came out under CBS Fender in the seventies after they wanted a guitar to rival the Gibson Les Pauls and SGs that were really popular at the time. This particular model has an agathis body, a maple neck with 22 frets, standard chrome sealed tuning machines, a hardtail bridge with six saddles and the large Tele Custom type pickguard loaded with two Seymour Duncan P90 pickups. Each pickup goes to its own separate volume and tone, and pickup selection is covered by a three way toggle. Given that the original model had dual humbuckers, having the two P90s offers a very cool and unique tonal set that isn't covered in many guitars in this price range.

The design of this guitar is pretty ergonomic to my senses. Like some modern Squiers I've noted that it's a bit heavier than I would like myself. I particularly like the solid feel that it has (IE: it really feels like its of good quality, not like a cheap toy). The neck has a very smooth finish and the fret ends on this model were great, no real issues. The upper fret access isn't the greatest in the world but it's not too bad considering the design.

Getting a good sound out of this guitar is pretty simple. It doesn't exactly sound like a Tele to me given the pickups, but it does display traits of Fender tones because of the design. It's kind of like the love child of a Tele and a Gibson Les Paul goldtop with P90s.

This guitar seems to sound good with a wide range of tones and amps. I've always been a fan of P90s and the Duncan Designed models in this guitar do a killer job of sounding good. On a clean sound the tones are fat and clear, and offer a nice brightness that is very Fender mixed with the dense P90 sound that is totally Gibson. It's a great clean tone for those who can't decide which tone they're after. Switching over to the drive tone offers a very cool and crunchy set of tones. They're very bassy with nice low mid heft and top end sparkle. The only complaint I have is that the design of the pickups is a bit scooped in the midrange for my liking, but that can be changed at the amplifier with some work.

All in all I think the Squier Vintage Modified Tele Custom II is a great guitar for the player who wants a great sounding Tele that offers something different than the usual Fender bright jangle or the Gibson esque fury of humbuckers blasting full tilt. At about $350 new these guitars are a great deal and definitely worth looking into for any Fender or Tele fan who just wants another tone in their arsenal.
Did you find this review helpful?yesno
Cookies help us improve performance, enhance user experience and deliver our services. By using our services, you agree to our use of cookies. Find out more.