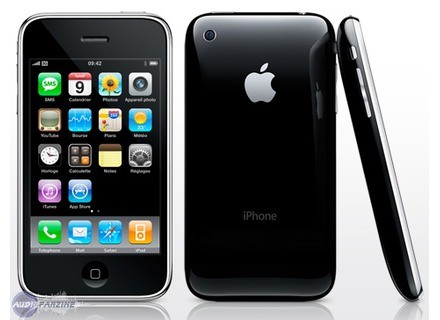 iPhone 3G, Touch tablet from Apple in the iPhone series.

While the original iPhone was the phone that brought Apple into the market, it was the release of the 3G that really bumped their sales to the point where they became legit competitors with RIM and the such. This phone features 8 GB or 16 GB of storage, 128 MB of ram, a 412 MHz processor (underclocked for battery life), the famous touch screen, a 2 MP camera and more.

The most notable feature with the 3G is that it can now use full 3G as opposed to “2.5G” that the previous one used. The back was redesigned with a polycarbonate backing to help prevent some heat issues. However, this did cause some slippage issues that some people experienced. The buttons were changed to metal to help provide a more tactical feel and longer lasting life. The phone itself was tapered more to help give it a sleeker look, as well as feel better in your hands. The overall size is pretty close to the original with the 3G being ever so slightly smaller.

The touch screen on this thing is to die for. It responds like no other touch screen on the market, and you can easily see why so many people are rushing to make “iPhone killers.” Until they can match the touch screen’s response and Apple’s App Store, they really won’t have much of a chance at beating this phone. The App Store is the biggest advantage Apple has over everyone else in that it features thousands upon thousands of useful and approved applications that people can download for their iOS devices to help improve their functionality. This is the true key to Apple’s success with the latest touch screen phone.

The 3G is now fairly dated, so if you’re in the market for a phone, I recommend trying to get the latest iPhone if you can. While there are other phones out there with touch screens, very few stack up to Apple’s.