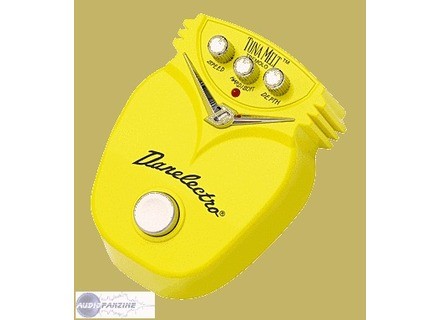 View other reviews for this product:
An effect available: the tremolo.

Connector jack (in / out) + 9V battery or transformer type boss.

In short, not the characteristics of insanity in terms of quantity. Neither too much nor too little. Anyway this is the kind of pedal ultra-simple, we buy because it does not take place, does his job and more ... is the least expensive of which is done.

Small detail: the pedal comes with a removable cap, tranparent plastic, which protects the knobs. I leave it permanently.

His biggest asset is his practical size, especially when you start to have a lot of pedals, and you must carry around a whole with each repetition.

Use can not be simpler, if only because it has only two buttons to turn to adjust the sound (+ selector waveform).

The issue is not so easy because of the size of the pedal and dials: it is very small, so go with tweezers. In my case it's not a problem because I found a setting that I like and since I do not touch anything except the on / off. For those who want to change settings on each piece that can be + binding.

My biggest negative on the switch on / off, too prominent and a little cheap: sometimes I support but the effect does not engage. The ideal would be for me the same pedal (size, number of knobs, sound) with a switch on / off Inrate (style ones on the pedals vox, rat, voodoolab ...). Perhaps I'll install one.

I was previously a Nobel, who had a bit disappointed (I could not find a convincing setting, and the sound was too colorful).

This is exactly what I was looking for. The tremolo is warm and does not alter the sound (the two together is a feat). Great.

I love the tremolo effect. I noticed the pedals that are worth 4 or 5 times more expensive (dunlop, voodoolab), it's hesitation. I tried the boss tr-2 in store, without being convinced. I bought the Nobels, used deception too.

In fact I was intrigued by the Danelectro long (small, cheap) and I realized that Dominique A fairly picky about sound, used for 1 year, whereas before he had the Dunlop TS- 1. So for the original price (49 euros in Paris, 29 euros + 10 port on thomann) I thought it was well worth the coup attempt. And I'm not disappointed.

Really excellent sound quality, small, practical ... its weak point: the switch on / off. As for life, we'll see.
See the source
Did you find this review helpful?yesno
Cookies help us improve performance, enhance user experience and deliver our services. By using our services, you agree to our use of cookies. Find out more.