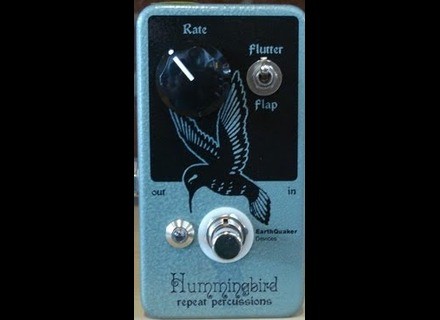 The EarthQuaker Devices Hummingbird is a unique tremolo pedal for electric guitar. While it's definitely a sort of tremolo, it's not your typical sound as it's quite choppy and has it's own unique sound to it. There is an updated version of the pedall that has more parameters and gets more in depth, but this review is for the original pedal. It's an analog pedal that has 1/4" jacks for input and output and can be powered by either a nine volt battery or power supply. It's not rackable as it's a stomp box.

While it's probably worth it to check out the newer version of the EarthQuaker Devices Hummingbird first, it's definitely worth knowing that the original is a nice pedal in itself. It doesn't offer the same amount of control, but you're getting the basic effect here that I find gives enough variation anyway. If you're after a more traditional tremolo/vibrato pedal, I'd look elsewhere, but if you're looking to get adventurous, it's definitely advisable to look into the Hummingbird.
Did you find this review helpful?yesno
Cookies help us improve performance, enhance user experience and deliver our services. By using our services, you agree to our use of cookies. Find out more.