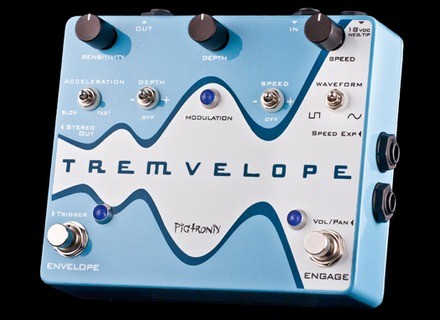 I have historically been a traditionalist when it comes to pedals. So this one is a bit of an odd purchase for me. I have owned and played weirder though. The idea with the tremvelop as that it's a tremolo that responds to the dynamics of your playing. Or in other words, a trem with an envelope filter attached. I believe this is something that in the past you could only do with some sophisticated rack unit programming. Maybe with an Eventide Eclipse or Axe fx. But not it's in pedal form. Feature wise it is pretty robust. Has expression pedal inputs for both the speed control and to pan the volume.

To be honest it's hard to get your head around everything this thing can do at first. For the first week I used it, the thing was little more than a noise maker. This is one of the few pedals that I would strongly suggest reading the manual. It helps a good bit. Other than that, it's a well made pedal with a great spec set so I have no gripes on that end.

The first thing I realized about the tremvelope is that it sounds very good in a studio setting where the stereo outputs are used. The whole panning thing opens another world to this pedal. Unfortunately this gets a bit lost in a live setting. But that's not a big issue.

Most of the effects are sort of your run of the mill trem things. The cool thing is a how you can manipulate them with dynamics of your playing. This opens up a lot of possibilities. There are a lot of very odd effects in it too though. You can get some crazy ambient stuff and some other sounds that are just plain weird. The ambient stuff is very very good though.

I know Pete Thorn is big on this pedal. I think it is best used in a controlled studio environment but it's fine used live if you know what you are doing. It does do the classic trem duties very well, but you really only get your money out of it if you play with it for a while. There are some unique and usable sounds in there, just give it some attention. You can get great atmospheres from the tremvelope and in my opinion the weird sounds are even more exciting than the typical stuff.
Did you find this review helpful?yesno