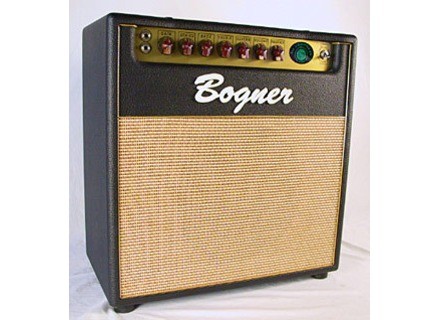 Otherwise the adjustments knobs (the version with reverb) in order are:
Gain | Schizo | Bass | Treble | Reverb | Volume | Presence
Schizo setting is actually a 5 way switch that acts on the EQ.
A kind of presets what. We spend a great equalizer "open" (dug medium) has a serious boost to thicken out the sound. (Ideal for single coil)

There is no StandBy on this amp, because it works with a lamp, and not rectification diode. The lamp rectification put a while to warm up and sending a voltage gradually the power stage, so no need to Standby.

I think it's difficult to get any easier, despite appearances.
No need for manual, it's good, no ... y '
It is super easy to find the sound you're looking at this amp.
Just set the gain and the overall tone with the Schizo switch and is refined with the rest.
15 watt, this may seem fair, but it's actually huge. Moreover, the performance can be in almost half a 100W.

Then there is the slap.
This amp is a monster.
We start with a priori like, "pfff, 15watts is for F. .." and we take off our shoes teeth in less than two.
Well OK, to play at Bercy, it's too fair, but just to regain his microphone!
Ideal for repeated and the horse in a small club.
To play flat, it's already too hard to stay friends with your neighbors. (Too bad, I have other friends ...)
This amp was designed to be a factory sounds.
It is incredibly versatile.
I manage to find everything, except of course the Metal sound.
But Hendrix to AC / DC through SRV, to Funk and Blues, Hard Rock and Classic Rock, everything is there.
The enormous advantage of a 15W, it can quite easily be able to work the power stage. And believe me, this is where the magic is created!
The distortion of the power tubes has nothing to do with that of a preamp.
We must try to understand.
I have two other tube amps high end and this one is my favorite.
Go ahead try it, it's worth, even if you may want to sell your dog and a kidney of your mother-in for the fund (it is cheap bastard)
When you try it, push out the volume to realize its potential!

I have only been two weeks, but I dreamed about it for months after trying ... and now I still dream waiting to replay it the next day!

I love the sounds I can get, its velvety character at a time or scabby according to the dynamics of my games.
I did all the shops of Paris and amp tried several different types of amps, but he marked me the most.
Of all my amps, it's my favorite and I would do this choice with his eyes closed even if it was more expensive!
Ok, so it's bcp tunes to let go, but you Fill in this:
€ 500 guitar plugged into an amp € 2000 will always sound a thousand times better than a guitar plugged into a € 2000 € 500 amp.
See the source
Did you find this review helpful?yesno
Cookies help us improve performance, enhance user experience and deliver our services. By using our services, you agree to our use of cookies. Find out more.