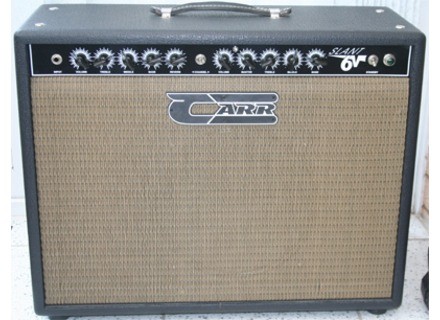 Like all Carr amps, the Slant6V is a fully handwired, point-to-point tube amp that is build to a very high standard. So basically, you get the best of the best build coupled with a bunch of great features. For tubes, the amp runs on 6v6 power tubes, a tube rectifier and a couple of 12aX7 and 12aT7 preamp tubes. I owned the high powered version so it was always running at 40w (and a SS rectifier), normally there’s a switch that lets you take it down to 22w or 18w. This will lower the headroom and increase the gain. You have 2 fully independent channels with their own EQ, reverb and volume controls. The OD-channel also has a boost control. It comes with a footswitch that toggles the channels and boost on ch2.

I still hold the Slant6V in high regards as it is one of the best amps I have EVER owned and often I have wanted it back, JUST for the clean tone. Yes, it is THAT good.
Did you find this review helpful?yesno
Cookies help us improve performance, enhance user experience and deliver our services. By using our services, you agree to our use of cookies. Find out more.