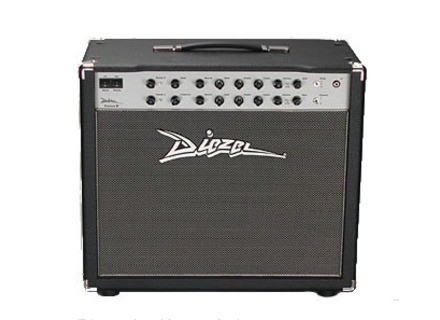 View other reviews for this product:
This is the kind of amp that gets you familiar with the brand that eventually if things go right allow you to move into the flagship amp that amplifier companies sell for higher profit. This is a cool little amp that has some versatility but will always sound like a Diezel. I didn't find much use for it other than the higher gain channel/ mode. The first channel is a clean to moderate sizzle if you can call it that. The second seems more of options to fill the amp rather than make it usable. The third mode called Mega is where this thing really shines. It has a great and very forgiving gain staging...which is what I feel Diezel does best. There gain is world renown and it makes it hard to do much else with the amp. Control are as follows.

One thing Diezel is known for is making a very user friendly front panel layout. It could get intimidating if your used to plexi layouts but with just minutes you can pretty much figure this out if you have spent anytime turning on a computer.

The first couple modes were pretty pointless to me. It didn't feel or really sound like something you would use for Texas blues or classic rock crunch. They can do those tones some what but for me Diezel is all about the crunch that they do so well.

The high output gain really came alive when engaged and I felt like goofing around with this thing until I click this option on. I think Diezel could just save some money and make this a one channel amp with this function only. However, someone else may find the first two modes somewhat of use.

I didn't use any manual because it was used and for me I am familiar with Diezels so I didn't think it was necessary. Tone really comes from playing around with your preferred settings anyway. So just playing around for a few minutes will have ample amount of amp discovery.

I was using a PRS and a Strat for most of my playing with this amp and I pretty much stay on the Mega mode function. It seems most amps try to do many things but do one thing really well.....Mega mode to me is what it does really well. So I stayed on that function the entire time. Though this combo comes with a Celestion K100 speaker I think it might do a bit more justice it is have some sort of greenback speaker. Since it has this Texas tone thing going on I would like a lower wattage speaker to get those early speaker distortion tones.

The tone I was chasing was a saturated gain that would be present in heavy rock/metal. I didn't try any drop tunings with it. Not really the player that I am so just 440 and half step is where I generally stay.

I would say that the EQ was very efficient and usable throughout the spectrum. For me I find that sweet spot and stick with it. Once I got to Mega mode I didn't veer to far from that point.

I think this amp is a little over priced for what it is. It is built very well but I just didn't find much use for the other functions. The quality and workmanship was done very well.

At new this amp is $3800, which is a lot of money. I know that there is a lot of freight added coming from Germany, so if you want this amp I would suggest getting it on the used market and let someone else take the hit for you.

I've played the VH4, Herbert, Schimdt, and the Einy. This one is a good intro into the Diezel club. I had fund playing it at lower volumes and stage levels as well. This is a keeper amp, unless you want to get a Herbert or VH4.
Did you find this review helpful?yesno
Cookies help us improve performance, enhance user experience and deliver our services. By using our services, you agree to our use of cookies. Find out more.