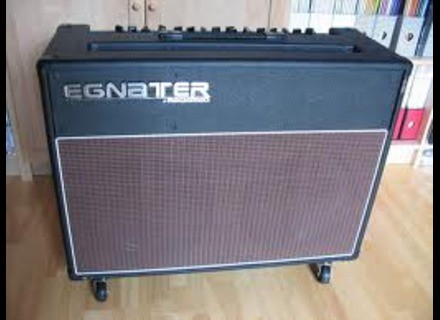 - Lots of buttons, it's more than a Pignose rgler, but you get to do what you want, and it remains a turn as the buttons on nimporte what amp.
- I would not say that a good sound is easily obtained, but rather that whatever branch of the guitar top and rglages, the sound is huge. after it is a question of which one wants her, but even with a quitar very very low end it sounds!
-L 'who bought used, I do not have the manual, anyway, It is not necessary, except perhaps for use by the South nophyte.
I put 9 because it takes only half an hour before arriving to the sound you want.

It is perfect any style of music, from jazz to death through all that playing with UEN guitar or bass.
"I use a Squier Stratocaster custom homemade (Seymour Duncan HotRail), a copy of jackson hack in and a lap steel guitar precision bass.
-I like this amp, regardless of the conditions atmosphriques the sound that comes out is always to die for, Fender, Marshall, and engl MesaBoogie boiboite in the same (which PSE's 40 kg , by the way)
basically a super versatile amp with a grain of lamps (normal, while a full yen in), only the super amps typs big nag style Warp T, randall mesa triple rectified or are not accessible in terms of sound.

I've had it for 6 months, and I think that I have for life, even in my wildest dreams I jou on an amp that makes me want to change!
-I have the equivalent test in Engl, Marshall, h & k, fender and mesa before and one mesa and Hugh & Kettner taient at the same level of versatility and quality sound.
-It is on, it's not given (3000 nine euros) but for an amp for life is an investment that I would do without hsiter! Hughes & Kettner my old 100 attax Has quickly forgotten: p
See the source
Did you find this review helpful?yesno