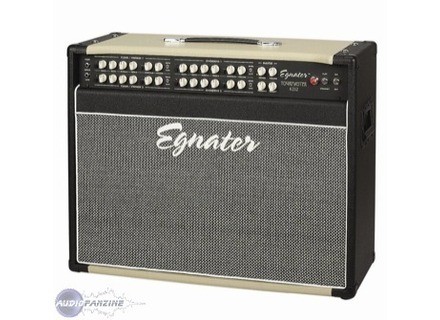 Making tubes more accessible seems to be the trend these days: in the wake of Fender’s big hit with their 5-Watt entry-level amp, the Champion 600, and Line 6’s collaboration with Bogner to warm up its algorithms to the good old sound of tubes, it’s Egnater’s turn to come out with a product that has a rather aggressive price for this manufacturer, since the Tourmaster 4212, an all-tube 100W combo amp, goes for under 1500€ while their 4100 Head, without its 4 x 12 cabinet which sells for 799€, costs 1390€ ...

Making tubes more accessible seems to be the trend these days: in the wake of Fender’s big hit with their 5-Watt entry-level amp, the Champion 600, and Line 6’s collaboration with Bogner to warm up its algorithms to the good old sound of tubes, it’s Egnater’s turn to come out with a product that has a rather aggressive price for this manufacturer, since the Tourmaster 4212, an all-tube 100W combo amp, goes for under 1500€ while their 4100 Head, without its 4 x 12 cabinet which sells for 799€, costs 1390€ ...

Let it be said, for those who might not know, that wattage doesn’t mean quite the same thing for transistor amps as it does for tube amps. Without simplifying too much, let’s just say that in terms of volume, a 30 Watt tube amp can blow away a 100 Watt transistor amp. So, imagine what a 100-watt tube amp is capable of: endless fights with the neighbors, of course, or breaking all of your grandma’s crystal and plates with one C chord! Incidentally, you wouldn’t need a PA for a small concert hall (for a Stadium it would be cutting it close ... just a little).

In view of Egnater’s excellent reputation (remember, they invented the concept of amps with modular preamps, also used by Randall’s MTS series), the value for the money is quite interesting. But it is far from the only asset of this amp. Equipped with 2 2x12 Custom-Voiced Egnater ™ Elite-80 speakers (models designed by Egnater themselves), the Tourmaster comes loaded with buttons on its front panel due to the fact that it offers no less than 4 different channels, each channel with the usual settings (Gain, a 3-band EQ (treble, mid, bass), Master) but also a Classic/Modern switch effecting sound characteristics. A global reverb is assignable and Egnater provides a robust footswitch with 6 buttons letting you go from one channel to another in the blink of an eye.

The most interesting part, however, is that at the rear of the amp there’s a Power Grid panel with a series of small switches that independently adjust the power for each channel. How does it work? A global switch reduces the overall power of the amp by half, then for each channel you can use a selector to switch between three settings: 10, 25 and 50 Watts in Half Power mode, and 20, 50 or 100 Watts in Full Power mode. This is simply great! Because of this feature, Tourmaster can be considered the most versatile tube amp on the market: by setting it to 10 watts or 20 watts, it will make a perfect amp for working at home, at 25 or 50 watts it can be used during rehearsals, and then pushing it to 100 Watts for real power during concerts ... True happiness!

On the other hand, because the Tourmaster needs a bunch of transformers to provide this flexibility, it therefore weighs a ton, maybe even two. Don’t expect to carry it more than a few meters without getting a hernia. However Egnater has remedied this problem by providing 4 heavy-duty detachable wheels, in addition to side handles that would let two people carry it at the same time. So you can’t really count the weight issue as a real drawback. Let’s return our attention again to the back of the amp where we’ll focus on the connections for the effects loop, which passes through the tube section and can be assigned to channels 1 and 2, channels 3 and 4, all channels or the pedal only, with it being possible to adjust the level of both send and return, and the opportunity to choose whether all this is in series or in parallel. Finished? Not yet! It also has cabinet voiced line/recording outs with impedance adjustment of 4, 8 or 16 Ohms and a master bias adjustment with test points! What do the people want? Sound? OK.

It’s now time to speak about the sound. And we’re happy to find the promised tubes, 8 preamp tubes(12AX7 ™ Egnater / ECC83) and 4 output (Egnater ™ 5881 type 6L6), all specially selected for Egnater by Groovetubes.

Channels 1 and 2 are reserved for clean sounds and are quite typically Fender-like, with the difference that channel 1 is ultra clean while channel 2 has slightly more gain and can therefore be pushed into mild overdrive. As for channels 3 and 4, they’re dedicated to overdrive: therefore with channel 3, we enter into a British rock sound, kind of Marshall-like, which will delight fans of Angus Young and/or Jimmy Page while channel 4 offers the most intense and ferocious overdrives of the amp, very Heavy Metal/guitar shredder and 80's sounding.

Note however: the Tourmaster amp is more rock than metal and will not be easily adapted to the extreme sides of rock/metal. It’s useless looking for Dimebag Darell or Korn sounds. Aficionados of Doom, Black, Death and Thrash will have to use a distortion pedal to get the massive sound they love. This is not a negative point, but one should be aware of it ...


For everything else, from jazz and blues to more or less hard rock, no problems, especially since the Classic/Modern switch available for each channel lets you play with the personality of the sound. On channel 1 for example, classic mode will give a Twin type sound while in Modern, it will be closer to the sounds of a clear JTM. And that's without mentioning the Contour setting, which is a sort of medium boost or reducer which also allows significant tone alterations ... The result: from clear to overdrive, from modern to vintage, there is very broad palette of nuances, particularly in transitional sounds like mild overdrive and heavy overdrive.

Here are a few audio examples:

With a Les Paul :

What can be said except that basically this amp lacks almost nothing. We could have wished for a lighter amp, but this seems difficult to achieve with so much to offer in terms of power choices. We might have wished for a footswitch with more than 6 buttons for more flexibility, or even MIDI capabilities. But that would be splitting hairs. The truth of the matter is that the Egnater offers, at a relatively nice price, an amp that sounds very good and that could very well be the only amp you’ll need, if you get past the transportation issue. Bravo.