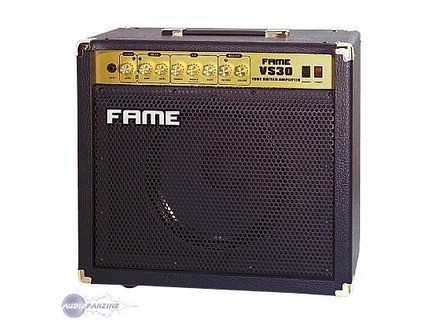 View other reviews for this product:
All tube combo 1x12pouces (except rectifier diodes), 30 good watts output hp 4 or 8 ohms, or 2fois 8ohms, hp internal automatic dconnect ds then.
2 channel, volume for the clean and gain / volume for the saturated 3-band EQ with mid shift pulling the master volume pot and the medium rather + rverbe for everyone.
Very simple to use, unlikely to crash. Effects loop series between prampli and power amp, perfect for connecting a pod without amps or so.
Very well built, impressive considering the price.
The effects loop is very powerful for the pedals that I was wrong, saturates. On the other hand if you go back into the amp with effects (normal use) has ben whistles, as if there was a feedback loop. But to drive a wet end 100/100 most active monitor is perfect. In this case the amp is pure and the effect is a little further into the monitor is very class.

Premire pleasant surprise, no background noise, which is exceptional in tube amps (take a mesa, any one for fun ...).
Second surprise, the original HP is overkill, more than my eminence GB12 (itself stronger than my celestion greenback dj rput very effective). In fact is equivalent to a 212 standard in light volume, thundering. Not change the empty hp, the holes are closer together than normal, and the lamps are very prs of the bowl of hp (I have even renounced some hp carrment that affected the tubes).

You can connect a channel for pdalier / rverbe always apprciable.
The mid shift lets you clean a little sound when you plug in a sturdy box in the lower type 412, not bad.
The clean up is to 13hrs with a tl baja Kinman, and noon with rg7 strings and pushes dj hairy. Not common in entry level.
The rverbe is great, really short so saturated and usable throughout its course not only 0 1.5 ...
The equalizer is quite common - is appropriate channel balance. It&#39;s always good not to have lots of buttons tease ...

Hp overpowered then, but also quite steep and aggressive, a little pnible with tl but with super rg7. Of course.
Neutral grain clean enough but nice and flattering, grain marshall and randall between saturated transistors. Earnings do not rise very high up, rather solid overdrive, rock. EH with the lamps of origin means, other lamps not change the sound evil GENERALLY.
I do not change, because it works well as is.
Curious as I am, three months later I did, and although the sound softer and Dfine has not changed so much as a.

The available volume is quite nice lev is a small amp that does all this fuss!
For use in taking a group box 412, is more reliable in that the sound will remain similar throughout the evening. Used alone, as it has less heat and I do not own this kind of alternative ...
Brief an amp any good and play nice. Lacks a bit of grain but good with other tubes can change a lot.
Please note, a buddy jazz genre golden ears remark that the sound is like envelope accompanied by some really not sharp standard.

I&#39;ve had it a month, have bought to plug a triac SansAmp in the return of the effects loop ... So as a power amp with hp in fact, my lack o OF INTEREST prampli on tubes.
I enjoy this great amplifier, very useful in lots of configurations and sizes of transformers utiliss enables stable operation.
As I&#39;m too lazy, I find myself just plugging my GENERALLY rg7 right and my faith in the reslut suits me well as is. I put the clean with cleaner and thoroughly saturated, and the only button I turn my guitar-heavy blues riffs ... Simple and effective, what amp rock&#39;n&#39;roll.
I will not say a line6 spider is worse, it&#39;s just diverged considerably, depending on what you have to take the amp the most adapted. For the large mtal is not the fame.
Some time later I changed the tubes to see, and install an HP randall jaguar and the result really but I like the original is frankly not mal.C Was not really bother to enlarge the hole hp jaguar or excited with six tubes in view of the difference tural its APRS / forward.

The series loop of Fame requires you use effects of quality because all the sound of the amp goes in, including bypass. I would take no Octaver behringer example ...

255 euros, and the manufacturing quality / sound, it is believed dreaming ...

Attention, for 45 euros more you have the big brother 50 watts far more capable (think: two equalizers, two sounds per channel, all remote control) and your gender if you could take the m 100watts in my 212 for to 400 euros. Unbelievable, I say!

MJ 2010: Personally I never had any problems with, for cons I prt twice mates (honest) who have not been able to use carrment (crachottements, not sound, weird). Of course when I walk verifies all impeccable, go figure!
My exprience lamp amps (mesa subway blues, triple grind, Sovtek mig50, bassman, and further in time and gibson farfisa) is that whenever I really needed aa shit. Fuse here, the lamp or space combines Moreover, while I eu.Pas reliable for a penny, but without upsetting the local all goes very well ...
I therefore took a TransTube era usa peavey bandit walking all shots, good sound and not too heavy or need to box .. and the public has always been happy! But I m&#39;gare ...
This fame is guaranteed 3 years, it has always been the enemy!