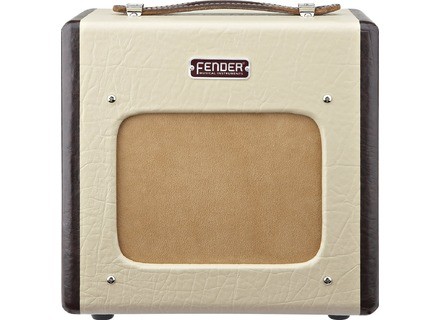 Life in modern cities can be a bit annoying when you’re a musician trying to practice, without disturbing your entire neighborhood. Naturally, manufacturers have been quick to propose various solutions, for a multitude of situations.

Some amp manufacturers have created solutions specifically for guitar players, with a range of small or mid sized amps, allowing the musician to turn the volume all the way up, without fearing a police raid.

It’s an obvious fact that good amp sound comes from an amp played at its max volume, above all if it’s a tube amp! Hence the interest of a 5 watt tube amp: reaching the good sound, but not too loudly!
Let’s open the packaging!

Once the amp is out of its packaging, if you love vintage design you’ll be satisfied. The two-tone brown and blonde vinyl covering looks extremely nice, the brown fabric overhanging the HP is soft to the touch and everything is consistent: the little Fender logo, the old-fashioned volume knob, the On/Off switch, the little red jewel pilot light, etc.

The leather strap handle seems to be strong enough for the reasonable weight (15 lbs., 7 kg). Fender added a nice detail: a Velcro strip inside the cabinet allowing you to tie the electric line cord when you want to move the amp.

Don’t except sophisticated settings: there’s one and only one knob, Volume. No Tone. This could be a point of contention for some, but it suits me just fine. In any case, you can quickly find the right sound with your guitar’s own tone and volume knobs. And, as the amp is vintage style, it’s coherent. A funny detail: the Volume knob is graduated up to 12. That is better than 11, which is better than 10!

You’ll find two Input connections, High and Low. The latter will be appropriate if your guitar has a high output level and if you need really transparent and clean response. That being said, I didn’t notice a big difference between the two Input...

The internal circuit seems to have been slightly modified to deliver more power and a little bit of overdrive when pushed to its limits. Inside, you’ll find two tubes (one 12AX7, for preamplification and a 6V6, for amplification), one 6", 4-ohm speaker and an external speaker output (4-ohm minimum).

It seems basic, but efficient, at least in certain cases. The Champion 600 is certainly not a versatile amp, with its unique channel and single knob. It’s highly probable that if you are desperately seeking new sounds, you’ll be disappointed. But, after all, the appeal isn't its versatility, and Fender's design frankly reveals what kind of sound it is made for.

After a short wait to allow the tubes to warm up, all suspicions disappear: the amp has a nice, clear tone and surprisingly has enough bottom end. The 6” speaker meets our expectations, and delivers a warm sound. Its a Fender, no doubt about it!

It's easy to hear the main sonic characteristics of other Fender amps, and it’s a bit surprising how such a tiny speaker can deliver such warm, round and powerful sounds. Even if the manual indicates that amp power is 5 watt, it’s enough to say a resounding “Hello!” to your neighbors. On the other hand, it won’t be sufficient to play in a rock group, but that’s what mics and PA systems are made for. If your rehearsal place has a PA system, the Champion 600 and a dynamic mic will do the job. Your back will say thank you... For example, a SM57 perfectly finds its way in the back aperture.

But I can already hear some moaners : “ OK, Champion is good looking, has nice clear sounds, but doesn’t seem to be that versatile.” And they’re right. The Champion 600 is built for blues, rock and jazz, not for metal and other extreme musical styles. But hard rockers could use an overdrive or distortion pedal, which could also be put back in the amp aperture. We’ve made tests with a Tube Screamer, and the results are very convincing, which compensates for the lack of dual channel and footswitch.

For the sound examples, we’ve used an American Stratocaster VG used in standard mode and an American 52’ Telecaster. The sound qualities of both guitars were completely respected, and their well-known characters remain unchanged. Furthermore, the Champion reacts to the playing styles, fingers or plectrum, with an equal respect for the dynamic, and it’s really pleasant to feel the appropriate vibrations in return.

Recordings have been made with a SM57 in front of the speaker, and sometimes slightly off-axis. You will gain bottom end if you move the mic closer to the speaker (yes, even with this little 6”), and, conversely, if you move the mic further away, you will have a more “open” sound
.
If you place a condenser mic a few meters away from the amp, and if you have a good sounding room, you can obtain a more natural sound. Don't forget that the SM57 always adds its typical colour... For each guitar, we’ve tried several volume settings, in order to demonstrate how the Champion reacts.

On clear sounds, the two guitars are perfectly distinguishable, sounds are simply beautiful and you can easily forget that you’re playing on such a tiny amp. Crunch tones are also insteresting, and typically vintage. A simple plectrum stroke and the amp saturates, it’s really pleasant. Regarding the distorted tones, that’s a matter of taste : as it sounds very similar to a 60’s amp, you’ll either like or not, with no in-between. However, nothing can stop you from connecting a distortion pedal that is more to your liking.
For your information, some users prefer change the tube(s), or modify the circuit. Please have a look in our forum, there’s a lot of do-it-yourselfers giving their tips and tricks!

The Champion 600 has advantages and disadvantages, but it definitely doesn’t leave you cold.

Even if versatility isn’t its strength, and even if it can hardly be seen as a symbol of modernity, this little wonder appealed to a lot of musicians in my circle of friends... And last but not least, its small size and light weight are real advantages if you want something portable.

You can find some competitors' products here and there (Peavey, Epiphone), and I encourage you to test them if you can. The choice of an amp is first and foremost a matter of taste.

The Champion 600 has its own character and can’t possibly be the solution to all expectations, but at its price of US SRP $266, it’s worth a try. And a buy.