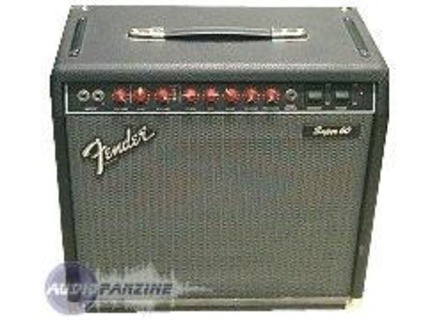 View other reviews for this product:
Small, 60-watt all-tube amp that can single-handedly deliver more power into its speaker than many other amp heads with higher ratings. Despite the year of production, you can be sure it's made in the US, with a quality hardly seen today. You have an EQ, a spring reverb, a stand-by for the tubes, a master volume and a rather nice overdrive. On the back you have an effects loops, which is nice. No headphones output, which is normal on an all-tube amp.

The key word is use. You turn the red knobs, the brand's trademark, and you can easily find YOUR sound. Thank God Fender does things right, mamma mia! It's awesome! Half way up, the clean channel starts to crunch heavily, but the sound remains crystalline and pure. It's an amp that can make even the worst guitars sound good.

I won't beat around the bush. I had never been a Fender fan. Until the day my dad gave me his "old" amp saying: Here you have something to enjoy yourself. And he was not mistaken. I've tried everything on top of it, from the grimy metal zone to the digitechrp2000 multieffects and the floor pod plus. Once you have found the right settings, this amp can deliver any sound in any style. I helped out a buddy of mine during a good death metal concert since the tubes had burned out. With the right settings and some good effects, it saved his day. And my small combo left more than one dumb founded. The only con is that the distortion/overdrive sounds really dirty for my taste, and the spring reverb isn't very impressing.

This small combo is 25 years old, according to the warranty card. The tubes had to be changed once during this period. The knobs make no noise after several years and the sound is still amazing. What warmth and tone. When I play stairway to heaven with my gibson les paul custom, I come close to the sound of jimmy page.

If I could find this type of amp at a modest price today, I don't think I'd hesitate. But vintage gear is pretty popular and it's impossible to find it for less than $600-$700 unless it's in pretty bad shape. So, I don't want to sell mine. It's...priceless!!!
Did you find this review helpful?yesno
Cookies help us improve performance, enhance user experience and deliver our services. By using our services, you agree to our use of cookies. Find out more.