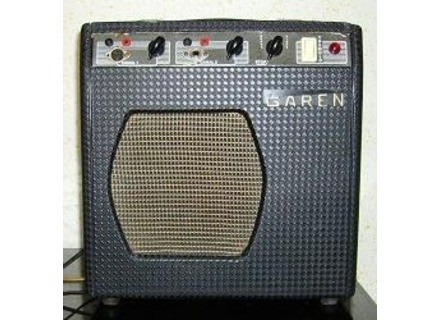 This is an amplifier lamps (3 in prampli, one in the power amp) Class A. It dvelloppe, depending what I was told, 6 watts. The amp has two inputs with connections old (one of which was modernized by jack t). Each has a volume knob. Potentiomtre acts as a switch to start equalizer and bass / treble. A button to speed rgler trmolo, which is using a dclanche interrupeur the rear (originally it seems that there was a PDAL, but my copy is no longer any original). The speaker is eight inches.

The utilisaion is simple, because the heating time is short (thirty seconds). Given the limited available rglages, though. Being lightweight, it is transportable aisment, which is enjoyable when you're used to handling large amps that "kill" the back.

The sound surprised at first by his power, was keep the size of the machine. It covers problem without an amplifier transistors 20 watts and has silenced the taunts like "you found in a garbage can?" The grain is relatively warm compress. There are some sounds kind of Vox. You can play a relatively lev without it saturates too. Moreover, the natural saturation of the amplifier is not what I prfre. The sound is clear my mind no longer valid. It sounds trs blues, jazz, rock and even 60s if you push the treble. The trmolo confirms this ide. The sound is vintage dlicieusement, with the right amount of grsillements. We can reget the absence of distortion and rvrbe, but an amplifier of the 60, if this n'tait rpandu the era. Probably the main limitation of this amp is its hp. I would like to hear what has given a good hp twelve, but there is no proper output. And then the loudspeaker is in four ohms, so ... less than a DIY ... I used this amp with a Les Paul standard, a Strat addition, an ES 335, a Variax 500, a Flying V, an Ibanez EX 140.

I possde this amp for ten years. I find it infinitely more endearing than the 10-15 watt amp transistors trade (and the sound is not the same). When the lights of this power amp, there is no longer gure. Garen has a ct the Inspector Colombo, it is found ridiculous and Surrans ds but he opens his mouth, one is impressed. And it's original use an amp franais. The vintage characters is fun, I feel 40 years back in rear. As for the quality-price ratio, I will not complain, I bought in a flea market a guy who n'tait not sure it works for 20 francs ...
See the source
Did you find this review helpful?yesno
Cookies help us improve performance, enhance user experience and deliver our services. By using our services, you agree to our use of cookies. Find out more.