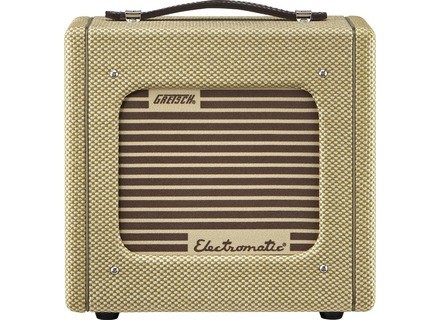 View other reviews for this product:
5-watt tube amp with two tubes inside.

One jack input and that's it!

Only one volume tone gain control.

It couldn't be easier: One input jack and one control, I don't know if it could be simpler, maybe doing away with the pot.

It has a manual, but it isn't really too useful.

In terms of sound, when you come from a low-budget solid-state amp, it's quite a change. It's cool to play alone in your apartment, but you'll quickly miss equalization controls. It sounds very lows-heavy and lacks highs, and it can't be corrected.

I played lots of different styles with it, from classical to metal, including jazz, rock, blues, pop, ska, with some pedals you can do some really weird things, but you are quickly limited by the lack of an EQ.

I played this amp with an ibanez shred-type, a gretsch electromatic, a BC rich, and a dobro acoustic-electric.

And I always observed the same, too many lows and not enough highs. I play guitar not bass...

In any case, it's a good approach to tube amps, but tis' very inadequate in terms of equalization.

I used it two years. And then I sold it. Without any regrets.

I really liked it as an introduced to the tube amp world, but I really hated its overemphasized low end without any chance for correction.

Besides cheap solid-state amps I didn't test any other amps before buying it.

With hindsight, I would choose another amp, a VOX (the 4W model), which offers more options in terms of EQ (ideally a JMI, but that's way too expensive), or even something basic like a harley benton if on a tight budget, at least it has something to equalize with!!
Did you find this review helpful?yesno
Cookies help us improve performance, enhance user experience and deliver our services. By using our services, you agree to our use of cookies. Find out more.