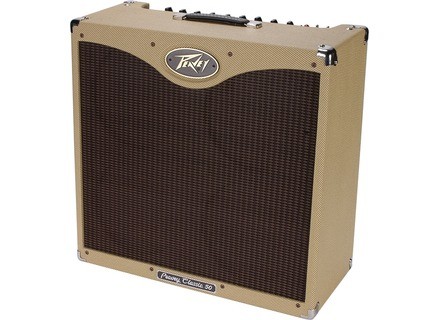 Value For Money : Excellent Audience: Anyone
Buy this productView price information >
View other reviews for this product:
First, the review posted by iamqman here is dead on, this amp has a beautiful warm clean with a mild EL84 overdrive on Channel 2. Very much targeted at country and mild rock applications (great tones for jazz too). I have the 4x10, and depending on the speakers it ships with (Peavey uses 3 different speakers at times), the amp can sound pretty thin. Now, nobody buys an EL84 amp hoping its big and bold like a 6L6 amp (Bassman), EL84 tubes are a different thing, very rich complex overdrive, but not particularly fat. The 4x10 version is going to be more mid-high voiced with less bottom end than the 2x12 version. If people are expecting this 4x10 tweed amp to sound like a Bassman, it certainly does not. The Bassman is a 6L6 amp, big and bold tones but much less features and much less range of tones to this Peavey. This Classic 50 probably sounds more Marshall-ish than Fender-ish. It is not a Bassman clone, much as it looks like it visually. For $800, this 4x10 Classic 50 is a ridiculuously good deal. Its a beautiful amp, has a lot of features, sounds very, very nice (if a bit thin on overdrive channel), and is so darn cool. You may chose to run an eq pedal in the loop to boost the bottom end a touch, no big deal. Overall, a beautiful amp and a great value.
Did you find this review helpful?yesno
Cookies help us improve performance, enhance user experience and deliver our services. By using our services, you agree to our use of cookies. Find out more.