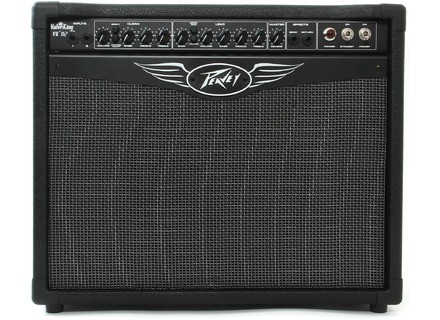 View other reviews for this product:
The Peavey ValveKing 1x12 is designed to be a "boutique" style combo amplifier on a budget, and it certainly does that. The features are as follows:

*Two channels - clean and drive
*Separate equalization controls for each channel (bass, middle, and treble)
*Onboard spring reverb
*Resonance switch (for a tighter or looser feel to the amp)
*Series effects loop
*50 watts of power, delivered by a pair of 6L6GC power tubes

The amp also features a "bright" mode on the clean channel, allowing more top end frequencies to come through. The drive channel features a gain boost as well as a volume boost. These controls are activated by push buttons on the front panel or you can buy the matching footswitch to control them. The last really cool feature that this amp has is a dial on the back that allows you to go from full Class A operation (warmer, more vintage tone) to full Class A/B (louder, more focused tone) or anywhere in between. It is nice because it gets one step closer to the true "boutique" feel of those high dollar channel switching amps used by the pros!

What is great about Peavey amplifiers I find is their ease of use. I purchased this amp brand new out of a box and took it right home. Right away I was able to dial in tones that were to my liking, and worked in both home jamming as well as band settings. I used the amp for many different styles in various rock, blues, jazz, and shred/metal projects all with great ease.

The channels are laid out very simply, and there is no guesswork to what the various controls and functions do. The clean channel is very clean, great for softer styles, but also versatile enough to go from country to jazz simply by using the guitar's volume/tone knobs or the EQ on the amp. The drive channel is the same way. I was able to go from AC/DC or Led Zeppelin style classic tones to Yngwie esque shred tones with ease and all the while the amp sounded great and performed flawlessly!

When I had this amplifier, my main guitars were a Parker Fly Deluxe USA, an AllParts/WD Music Strat with DiMarzio HS-3 pickups, as well as various Yamaha electrics. When I bought the amp, I was using a Yamaha DG-60 combo and wanted a proper tube amplifier to get a step closer to the sounds I was hearing in my head. As I stated above, the channels are very versatile, and there are lots of sounds to be had within.

The clean channel is a great, almost Fenderlike clean. Using a darker setting with the EQ and the bright switch disengaged yielded a wonderful jazzy texture that worked very well for the Latin band I was playing with at the time. However, I was able to switch the bright mode on and dial in a bit more treble and, using a single coil, get a killer sound for chicken pickin'. This was especially effective on my Parker Fly, which has a coil tap function, so I was able to go from darker to brighter with great ease. I should also mention that this clean channel sounded great with the piezo (acoustic) pickup on the guitar... very natural and uncompressed.

The drive channel was easily my favourite feature of the amp. Even after purchasing a Mesa Boogie Mark III head and Basson Sound B212 cabinet a year later to upgrade, I kept the VK112 around for a few months to A/B the two. While the ValveKing did sound noticeably thinner (due to the single 12") I still was able to get very smooth, Boogie esque lead tones from this channel. I often used the amp in conjunction with various modified overdrive units and preamps custom built for me, but there were times that I would leave the pedalboard at home and plug straight in. I never was disappointed with the drive tones from this amp. Like the clean channel, I was able to dial in many different stylistic tones from vintage to modern. The onboard gain boost was very useful when I would venture into metal territory (though the amp is not designed to have endless amounts of saturation... the drive channel is more of a singing "vocal" tone.) and the volume boost was nice as well, though I didn't buy a footswitch for the amp so I couldn't use it effectively.

It is definitely a great sounding amp no matter how you slice it. It sounded equally decent with humbuckers or single coils I found. I found myself using 100% Class A mode for a more vocal esque tone unless I needed a bit more punch, in which case I would dial it over to Class A/B mode.

All in all I was extremely impressed with this amplifier. For the $450 I paid for it, it delivered a whole wealth of great tones and voices. Though some of the stock pieces (tubes and speaker) were obviously weak points to an extent, they didn't really detract from the tone, and I really enjoyed this amp for the year or so that I owned/used it. Peavey gear has been something I have used an abundance of over the years and I wouldn't hesitate to recommend this amplifier to anyone looking for a great tube amplifier on a reasonable budget. It's not going to have enough chugging gain for modern metalists without a boost, but for those seeking something as a versatile, vocal sounding amplifier, look no further than the Peavey ValveKing!
Did you find this review helpful?yesno
Cookies help us improve performance, enhance user experience and deliver our services. By using our services, you agree to our use of cookies. Find out more.