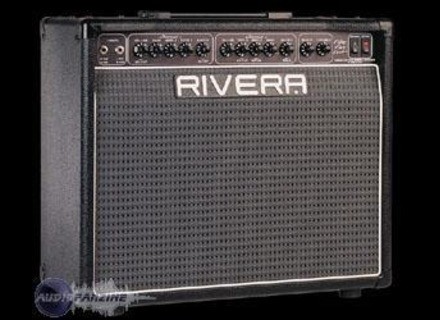 View other reviews for this product:
All-tube amp (EL34 power two lamps and lamps RIVERA ... prampli classic) with 2 channels (clean and drive) to 50 Watts in a true 12-inch Celestion G12T-75
Super clean sound with a boost function Ninja
Big Sound also drive with a boost for solos INTERESTED
The RT 55 has a nice reverb and a SETTING THE prsence.
The pdalier can select the two channels and boosts
It's beautiful and strong ... what justifies the price level of a high-end amp trs.

The rglages are simple, versatile trs (Meddle interaction between Bass and Treble) and trs effective.
Each channel includes rgalge and Master Volume.
Submitted the effects loop of a intrt potentiomtre volume input and output. Output line and output supplmentaire HP. (As usually with a combo, addition of an HP supplmentaire brings a lot of broadcast quality sound)
This is an extremely ... prcis rgal. To enjoy the maximun sounds logical it will involve an instrument of the same bill.

I love this amp beautiful and opulent vintage building. The sounds are obtained in a fairly wide range of Fender and Boogie directed musicians express prcis touch. The R55 is suitable for jazz, blues & blues and rock, modern rock, to pop rock. Hard + and refrain (though the box of not refuse to deliver its Watts ds that you push all the right ...)
The clean sounds are amazing (with a good Start or LP!). In distorted sounds it's all good, certainly with optimal LP (I have only used a Start on that channel).

I used a little over 2 years ERRF (30 Watts) and the R55-112 two years also. I had the opportunity several years ago to test some classic amps m'arrt march before the choice. I returned a less powerful amp because I do dernirement dsormais plays in small clubs and cafés concert or I can not use the 50 Watts of R55, which is the only one I inconvnient to report today.
See the source
Did you find this review helpful?yesno
Cookies help us improve performance, enhance user experience and deliver our services. By using our services, you agree to our use of cookies. Find out more.