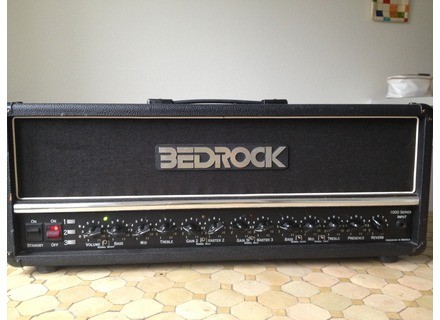 This amp has three channels, with a shared eq section for the second and third (ie - mid and high gain) channels. Features a global Presense and Reverb knob as well as voicing switches for each of the three channels.

The channels switching was very slow and you could actually hear the channel gain swell when going from the clean channel to one of the gain channels. My reverb also never worked properly.

The clean channel was okay. I expected better considering the 6L6 power tubes. The second, mid gain channel was fairly mediocre. There were some decent high gain sounds to be found on the third channel, but the shared eq was hard to work around. Overall the amp sounded pretty dull and boring with nothing interesting or special going on.

I am a sucker for three channel amps. I try to play every one that I can. When I came across this one for $300 I jumped on it. I was left very disappointed. The tone of the amp was pretty flat. The amp itself seemed on the poorly made side of things. Even if the Reverb worked properly, I would still have had that opinion.

I also had a sneaking suspicion that the amp had more solid state in circuit than you would have assumed. I'm fairly sure that reverb circuit was solid state, but I remember there only being four preamp tubes in it, which seems impossible to sufficiently create the amount of gain available.

The ultimate downfall of the amp, for me, was the awful channel switching. The slow, ramping switching drove me insane. It made it completely unusable for my needs.

It's possible that I had a lemon, but I don't think so. There is a reason this company didn't survive the 1990's boutique market and it wasn't because their amps were secretly awesome (or at least this amp wasn't awesome). If you see this amp, I'd avoid it.
Did you find this review helpful?yesno