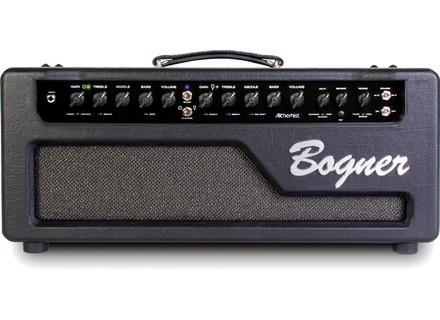 View other reviews for this product:
6L6 tubes. Wattage control. 2 channels. Effects on board. Not a super complicated amp except for the whole effects thing. It does have a lot of voicing switches though. Also has a boost. Par for the course for Bogner.

Now let me go ahead and say, I had this amp for 2 weeks before I returned it. It's not uncommon for me to return amps but I really felt strongly about this one. I was using it with a Les Paul classic (BKP installed) and a Bogner 2x12. The manual is actually pretty good about explaining what the controls do although it's not the best manual I've ever seen. To be honest most people won't need the manual because most of the switches are self explanatory. The effects are a little tricky but honestly I didn't use them much at all because they sounded awful to me. The reverb is okay and all the other effects are just trash to be blunt.

The Gold channel is, in my opinion, not up to par. It seems like it can't decide whether it wants to be clean or crunch. Switching the modes about doesn't do much to my ears. It either sounds really sterile on clean mode or really weak on crunch mode. It's kind of a jack of all trades master of none channel. The mercury channel is okay, and it kind of resembles my Shiva lead channel at times. The bright and mid shift controls throw it out of wack and I don't mess with these. It still doesn't nail that Bogner "woody" gain sound but it gets close.

This isn't a particularly useful amp even for the somewhat reasonable price. The first channel I think is borderline awful, and the decent to good lead channel isn't worth the price. The effects are also not very impressive. In the amp's defense I felt it was a reliable piece of equipment but I only had it two weeks. Thanks but I'll keep my Ecstacy.
Did you find this review helpful?yesno