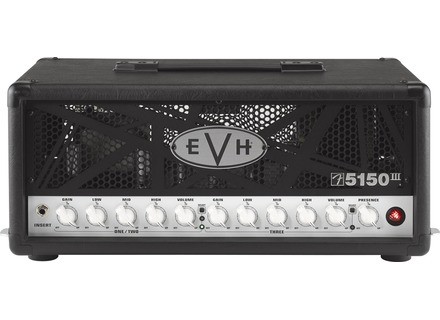 On paper, this head is very interesting. Head still impressive (quite deep), which in addition is presented as having the same sound as the original 5150III it deserves a priori that one is interested.

The guitarist colleague of my group was planning to buy a head to replace his 5150. Having taken a big slap on the 5150III at a concert, he is so interested in the head at first very attractive.

After a day of tests in two different stores to was the big disappointment, it does not sound like 5150III absolutely original, but this I am going lower.

Concerning the use so there's nothing particular to say. If this is the switch-up and standby voltages are located behind the head. Which can be annoying in some cases, but also the resonance knob is at the back.

A Note that provides footswtich apparently with the head, a good point.

We tested this in two head shops in Paris, one on a Mesa 2X12 cabinet and the other on a 1X12 Palmer.

In both cases we were disappointed, Clear Channel is arbitrary rather cold and impersonal, but of course we were not the why.
It is on the overdrive channel that disappointment was the largest, the amp delivers a very strange with a bump in the lower midrange very unpleasant.
Basically boosted channel has nothing to do with the original header, the sound is exaggerated in the lower midrange / bass as if trying to hide a lack of presence and scale in the sound. In the end it becomes very unpleasant action on the knob of resonance reduces this effect when it is close to 0, but the sound becomes cramped and noisy. In addition, the EQ is fairly ineffective, impossible to erase this unpleasant sound.

Constant on the same baffle palmer with the second head, it's not strange, therefore, not just the cabinet. Also I notice that the second head blows a lot less than the first, so I now doubts about the quality of manufacture.

Also note, a very big difference in volume between channels. The head is then limited unusable if you use multiple channels in a group.

In conclusion, this head is in my opinion to avoid.

Too bad it is yet a point of view very interesting features given the price, but the sounds are just mediocre.
Better to save me a little more to pay a real 5150III used, that sounds much better even at equivalent volume.

And for those looking absolutely a compact head, carvin the V3M is well above issue sounds (clear sound excellent, good distortion and many adjustments), the Koch Studio Tone is also very good (a good grain). Also this 5150III 50 W is not so compact it, it almost as deep as wide.
See the source
Did you find this review helpful?yesno
Cookies help us improve performance, enhance user experience and deliver our services. By using our services, you agree to our use of cookies. Find out more.