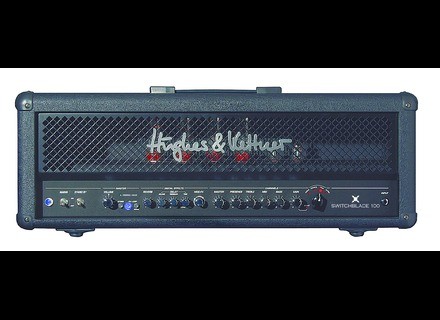 View other reviews for this product:
The Hughes and Kettner Switchblade 100 head is a programmable four mode (yes, FOUR) single channel amplifier head that features a singular EQ with bass, middle, treble and presence controls. It also has a master volume control. Pretty cool.

Oh yeah, I should mention that it also comes loaded with a host of onboard digital modulation, delay and reverb effects. It also has the ability to save 128 presets in the included footswitch. It's basically like having a tube amp that has an integrated effects switching system all in one convenient package. Here's the full list of features:

Surprisingly, it's not nearly as difficult to get a good tone out of this amp as it may seem. It reacts much like any modelling amp as far as setting up presets goes, and that's quite honestly the hardest part of using this amp. Setting up a core tone to use is as simple as turning controls until you get a tone that you desire. This amp has a bunch of different tones available for sure and once you get over the expected learning curve that it takes to get used to dialing in tones you should be fine. It's basically a single channel amp with different modes so if you think of it that way... it might be a little bit easier to wrap your head around as opposed to thinking of it as an uber complex four channel amp with all these effects and sounds to think about too.

I've tried this amp with a whole different slew of guitars, but have come to prefer it with superstrats that feature humbuckers. I find it to have a very eighties type of character overall tonewise, especially with the effects engaged, and playing lead stuff through this amp makes me feel like it's 1988 in the Troubadour.

Each of the modes provides a different sort of tone and it's a gradual increase in gain/saturation with each mode. The clean mode reminds me a lot of a modern Fender... not quite as spongy/warm as a vintage one, but still with that nice lush clean headroom. The crunch mode is like a slightly more refined Marshall JCM800 to me. The lead mode is like a Bogner/Soldano amp (and is my favourite mode) which is very mid heavy and smooth sounding. The Ultra mode is akin to a Dual Rectifier or Peavey 5150... not for the faint of heart! It gets to the point where the levels of gain can be unmanageable but for those who want it... it's there.

The effects, though they're digital and sound like it, provide a good range of tones and textures that match well with the amp sounds and aren't obtrusive or cheap sounding. It's definitely a convenient factor to have them built right in and the ability to save different presets with them too.

All in all this amp is a fantastic amp for someone looking for a whole plethora of tones in one easy and reasonably laid out package. It's a stellar all in one unit. As an amp the tones are not nearly as good as some of the better tube amps out there, and the effects don't come close to the top notch stuff by TC and Eventide, but I wouldn't expect that from a modelling amp. It sells for anywhere from $1400-$1700 new, but can be had for as low as $700 used if you look... really a killer find for that kind of price.

If you're looking for an amp that is a great and versatile "all in one" amp with effects, you can't really go wrong with the H&K Switchblade 100.
Did you find this review helpful?yesno
Cookies help us improve performance, enhance user experience and deliver our services. By using our services, you agree to our use of cookies. Find out more.