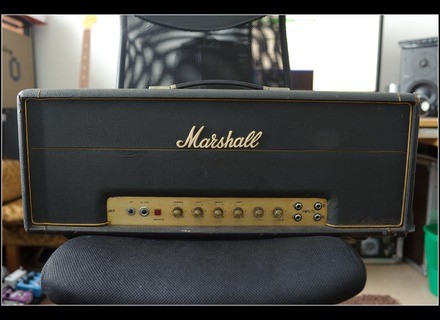 View other reviews for this product:
Like always I was searching for tone. I bought a Hiwatt Dr103 and it was made for Canada so the model number was a little different but still a DR103 nonetheless. I played that for a while but it could never get out of the classic rock vibe. So I traded a guy for his 1974 Marshall JMP 100. That was a very good decision that I don't regret.

I got this thing home and man was this a screamer. The first thing I noticed was how sparkly clean the clean tone was. I don't find Marshall to have a very good clean tone but this sure did. I slapped an Ibanez TS9 in front of it and man it sounded to good. This amp was made to take pedals in my opinion very well.

The best thing this amp has for me is to jump the channels. It gives that boomy punch that hits you in the gut or chest which I like and others don't. Just a great punch to it when channel ganged.

Basically a drunk monkey could figure out how to use this amp. Just beware that as soon as you turn the volume past 1 it gets scary loud. Be prepared that the taper on the volume doesn't work like your television. In between 3-10 the volume doesn't change much it just gets overdriven. I have never used a variac with it like the infamous EVH did but hey maybe one day I'll buy one.

Use a small jumper cable and plug it in the lower input of volume 1 and the other end in the upper channel of 2 and dial in that volume as desired for a nice jumped plexi tone.

I liked using my amp jumped with a nice OD pedal in front of the amp. My pedal of choice with this amp was a Boss OD-2. I would click the OD-2 in turbo and man was I getting scary close to Paige tones. I was using a Les Paul of course.

I also enjoyed using a TS9 with it which gave it even more of a vintage vibe with a little less gain. I was running the amp into a vintage Marshall 4x12 with blackback speakers in it. For classic rock this was the best I could possibly achieve. If you slammed the front of it with a Boss SD-1 you would get great 80's rock tones.

Maybe my all time favorite guitar amp. Not an amp I would ever go out and gig with but I have recorded with it several times and it sounds fantastic. I would want to own another one when I get a little money saved up. I would recommend this amp to any Marshall lover. It is classic tone and will not disappoint. I think you can find them for around $1200 if you look hard.
Did you find this review helpful?yesno
Cookies help us improve performance, enhance user experience and deliver our services. By using our services, you agree to our use of cookies. Find out more.