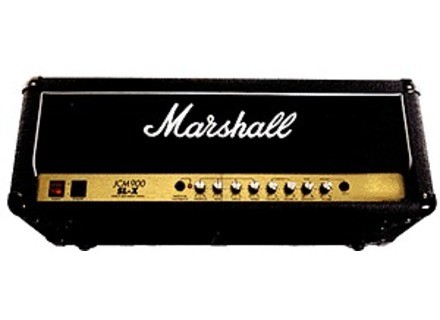 View other reviews for this product:
All-tube amp head, no diode or as little of the JCM900 dual reverb!
The 2100 version is a 100w head, personally I own the 2500 which is the version 50 of the head!

The settings are very simple, this one setting, a 3band equalizer, two switchable master volume, gain adjustment and an adjustable volume of the preamp!
A switch hight / low backside the head, which allows some kind of power divided into two, convenient to home!

I put new, because the sound is exeptional, I would not go up to ten because we regret the existence of a second channel!

This head is single channel! To get a clear sound, you have to play the volume and tone on the guitar!
Marshall aggressive sound for a comsomé with SG, there is no better!

I put 8 because again, we regret the existence of another canal, after such a matter of taste!

It is not any time to have a pseudo second channel, the two fat master volume control that are switchable!

Moving from a clear sound a little crunchy with a lead of more aggressive by simply turning the knob gain!
The sound is very impressive! I put that head to the same height as the JCM800 in Jmp2203, the grain is at the rendezvous, the heat Equal!

I use this head for 1year!
I like the progressiveness of the gain, the dynamics of the amp, the only downside for me and the single channel, but there are people who apreciated this, then all the best marshall head are almost all single channel at the same time!

I already play a lot of amp marshall, peavey, laney and H & K, the JCM900 is doing more than well, it is even the best marshall head in my play! Heat, momentum, gain = D!
See the source
Did you find this review helpful?yesno
Cookies help us improve performance, enhance user experience and deliver our services. By using our services, you agree to our use of cookies. Find out more.