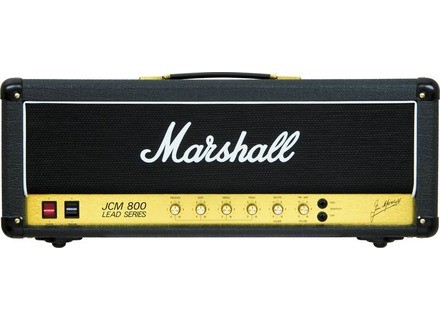 The JCM800 should need to introduction. There are so many amps based off of its design, it's not even funny. They have been a platform for modifications since the early 80's. Very easy to dial in for that classic rock sound. It's one of those amps that will work for anything. Toss a boost pedal in front and it can do metal. Back off the gain and it does a great clean.

The reissues have a built in FX loop, which you can bypass, which makes the reissue the one to get in my opinion. There were many many variations of the 800, but the reissue is a recreation of the famed vertical input 2203.

Soundswise, this is a very versatile amplifier. Sure it only has one channel, but you can get anything for crystal clean to classic rock overdrive. The thing I really like about this amp, is that whatever guitar you use sounds like itself. Some amps tend to make every guitar sound kinda similar, but the 800 really shows off each guitar's personality. A Strat will sound very stratty, a les Paul will sound very Les Paul like.

The 800 takes boost pedal very well, which is a huge plus. It can also sound killer very clean, which I honestly didn't expect. And it shines with a Strat!

My only real complaint about this amp is that it tends to be on the brighter side. I like amps to sound great with everything set at 12 o'clock (except for maybe gain and volume). With the 800, I find myself turning off the treble and turning the presence way down. I do tend to like amps that are somewhat dark, but not too dark.

The FX loop is good, but you tend to loose a little bit of 'something' when it is engaged. It's not a deal breaker or anything, but I would definitely not keep it engaged if I wasn't using it.

The amp itself is very loud. It's 100 watts is definitely loud.

Overall, this is a very solid amp. It's an instrument in of itself and is excellent at showing of each of you guitars' unique voice. I have wanted on of these for years and years, and I am very excited to have on in the collection. I own lot's of great amps, and the 800 will remain in the stable.
Did you find this review helpful?yesno