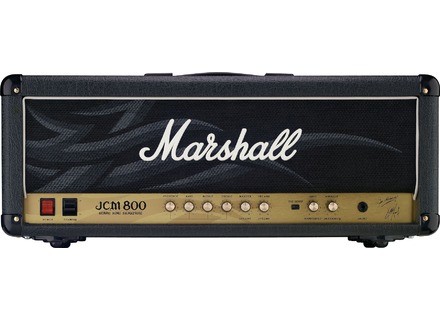 View other reviews for this product:
Kerry King has been one of the leading heavy metal guitarists that have been using the JCM800 amplifier throughout most of his career. After using the amp for probably 20 or so years, he finally has his own signature amplifier. It is the same as a normal JCM800 2203, but this one has KT88 tubes instead of the 6550 or EL34 tubes that originally came with them. It also has a built in noise gate, "Beast" knob and "Assault" knob. To top it off, it even has some of his famous tribal artwork on the grill cloth.

Marshall did a pretty good job at getting Kerry King's signature sound to come out of this thing. With everything turned off, it really sounds like a standard JCM800 with KT88s in the power section. However, once you engage the settings, all hell breaks loose. I'll get to that in the sound category. Everything is laid out nicely in this amplifier, and it's really easy to get a great tone in just a matter of seconds. One big gripe I have with this amp is that it has no effects loop. I know Kerry King doesn't really use an effects loop, but for the rest of us mere mortals, it really helps make the amp that much more versatile.

With everything turned off, this sounds like a standard JCM800 2203 RI with KT88s in the power section. It's huge sounding and has that signature "Marshall" gain. The real trick is when you start engaging things. The assault switch is basically activating Kerry King's signature EQ boost that he's used throughout the years. It pushes this amp into overdrive like no tomorrow. The gate works great on this, and I find it's actually needed given the amount of gain that this thing has. The assault knob basically dials in the intensity of everything.

If you're looking for Kerry King's signature sound, this is a good amp to check out. However, you can get that tone with a standard EQ pedal in a "frown" pattern and a JCM800 with 6550 or KT88 tubes. If you don't have the funds to pay for the Kerry King name, go with that setup instead. That said, if you're a fan of the Slayer sound and don't want to run any external boosts, just pick this head up. It'll do everything you want it to.
Did you find this review helpful?yesno
Cookies help us improve performance, enhance user experience and deliver our services. By using our services, you agree to our use of cookies. Find out more.