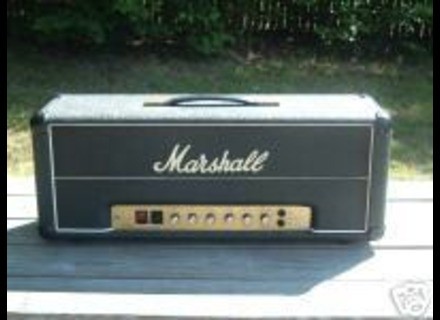 The 2204 model was in production from 1975 until 1981. Marshall got rid of the extra two inputs for the darker channel and use the simple high and low brilliant channel. You also had a master volume control which was new during this time that Marshall was rounding off the JMP amplifier series. You also had a similar EQ section of presence, bass, middle, and treble.

This amp is very easy to dial in. If you have spent anytime with a Marshall amp before than you can easily figure this amp out. You have a presence, bass, middle, and treble,e and well as a gain and master volumes controls Set the gain to your liking and the master to your overall volume level. The eqing will change from speakers to speakers and cabs to cabs as well as using different guitars so let your ears be the judge.


The tone of this is a very classic Marshall sounding tone. Since this is 50 watt. You really only get 3 db less then you did with the hundred watt amplifier. However, you get less of the headroom than the hundred watt amplifier which in turn would give you a quicker overdrive break up any spongier feel in the power section. Many recording artist used to 50 watt model over the hundred watt because you were able to dial in that nice spongy tone with a little bit easier and quicker power to break up.

This amp sounds very good when you modify it to get extremely high gain distortion tones. Many users during 80s would modify these amps to get their recording and touring amplifier needs met. Even today maybe guitar players will take these old original Marshall amps from the 70s and early 80s and get them modified by some of the best Marshall amp modifiers in the business.

Many of these amps can be found for just about $1000 on the used market and in the classified section of some forums. They aren't hard very hard to find as Marshall really saturated the market back in those days with these amplifiers. I highly recommend this amplifier if you're looking for a classic Marshall tone and I would highly recommend this amplifier if you want to get a modern Marshall tone. but it will cost you between $400 and $700 extra to get this amplifier modded by someone who is skilled enough to do that.
Did you find this review helpful?yesno
Cookies help us improve performance, enhance user experience and deliver our services. By using our services, you agree to our use of cookies. Find out more.