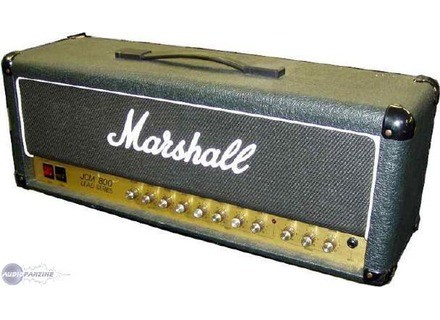 View other reviews for this product:
All-tube amp 50 watts, the only JCM800 with an effects loop, direct output (without simulator hp but hey!), A rverb!

So it's also the only two channels have a JCM800, with a clean and Bass Volume Treble more religious a gain circuit, which means that the higher up the volume, at a crunch!
The channel has saturated him a three-band low-legalization, mdium, treble, a SETTING THE gain and volume!

7 out of 10 because the clean channel could bnficier better eq!

The configuration is very simple, you plug it all and sounds quite easily!

Marshall then it's not worth it to spend three hours paufiner the rglages, turn some knobs and presto, it left my kiki!

It is ideally suited my style of music (big fat rock pchu well!) But its weakness is clear sounds cruncher who start high volume (if you want a crunchy sound, a sound trs well, but for its clean trs is rat!), the clean may be a little more singing, it's the incisive trs as a channel, but at the same time possde a super dynamic!

Saturated channel, is perfect, the clean lgrement crunchy crunch through the bluesy, rock and heavy rock up, it works great! It sounds trs round and warm and has plenty of crunch biting in saturated further!

Default of one little amp, it could have a bit more bass but hey, it may be to my power supply of condos 17 years of age!

I have for several months, I use a lot of time at home or in a group!

What I like about him is his ct a little old-school Rock and his par excellence and also its simple ct (no touch bass boost or mid boost or bright or trucmucheboost while is with the knobs), Marshall c'estdu trs good (unlike the current production!), which I regret a little bit against it by its lack of versatility, especially for clean sounds!

Before buying it, I thought my way to the JCM2000 as ENGL 900 and not liked (and I do not like!) Not at all, I also tried a correct (but hey, nothing to see even when is not the same type of sound at all, nor the same type of amp), I really did not take a Marshall and then when I saw the OCCAZ I jump over and told me that worst case I could sell it (to take ENGL me!) and then actually I liked it and I kept it!

This amp suits me at the right rock, APRS course it lacks some sounds but hey nothing is perfect! It's not a Mark 4 or GP3 either!
See the source
Did you find this review helpful?yesno
Cookies help us improve performance, enhance user experience and deliver our services. By using our services, you agree to our use of cookies. Find out more.