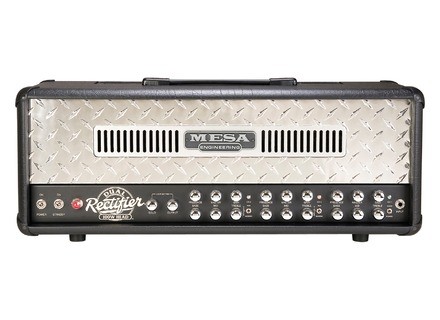 View other reviews for this product:
The Mesa Dual Recto is a 100watt all tube amp. It can either be run with solid state or tube rectification. The power section is fixed bias with the option of running 6L6 or EL34 power tubes. It has taps for 4, 8, and 16ohm cabs.

All 3 channels have individual 3 band EQ, presence, gain and volume. The green channel has clean and pushed modes, the orange and red channels have raw, vintage, and modern modes.

This amp takes some getting used to, mostly because you have to go about EQing it different than a normal amp. That said, the manual has an absurd amount of helpful information and tips for how to use this amp, including info on EQ.

This amp sounds great once you get a handle on the EQing. There is a tendency of this amp to be fizzy so you have to watch out for that. Modern mode is really fizzy, but vintage mode sounds much better. You might need a boost the amp to really get it into high gain territory, but once you do it sounds amazing.

The clean channel is surprisingly awesome. The clean mode has a very nice fendery sound about it, and in pushed mode it has an amazing light OD. I really loved it. My one complaint about the clean channel is it lacks some headroom at higher volumes, but that could be a good thing for some people. I certainly got some awesome tones out of it because of it, they just weren't clean.

Along with being fizzy, this amp is also really prone to being muddy. But if you take your time and use your ears when EQing it the amp can sound really great. Switching out the stock 6L6 tubes for KT77s (you run them in EL34 mode) really helped add some clarity to mine.

Honestly there isn't anything I can complain about. Sure it can be fizzy and muddy, but that's more a byproduct of user error. The Dual Rectifier is a great sounding and surprisingly versatile head that's built like a tank and will be reliable gig after gig. The fixed bias makes it super easy to maintain and a great first head.

The biggest set back with this head is the price, its pretty steep. But used they can be had for under a grand, I got mine for $800, and at prices like that its a killer deal.
Did you find this review helpful?yesno
Cookies help us improve performance, enhance user experience and deliver our services. By using our services, you agree to our use of cookies. Find out more.