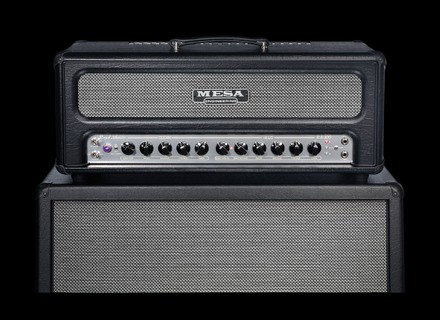 View other reviews for this product:
Aesthetically, the Royal Atlantic is gorgeous. Black on black with a silver faceplate. The amp has a very "next generation" look to it. I've noticed this of all the newer boogie amps. Everything is space age and clean. The front panel gives you separate eq for the clean and gain sides of the amp as well as indepent master controls for the LO and HI modes. The power soak on the back allows for attenuation up to 16db (5 w) and the attenuation is independent for each channel. Also on the back panel: Bias select for EL34 and 6L6, Reverb control and bypass switch as well as a mode defeat switch. You also have a loop and control over the amp's fan speed. Having a global bypass switch for the power soak on the front panel is a great touch.

I know a lot of people (including myself) have been dismissing the RA, thinking of it as just a re-voiced electra dyne with an attenuator and a new head case--but it is much much more than that. I'll go ahead and get it out of the way: This has just has much useable gain as a Rectifier or Mark series amp but it's feel is in a league above that of a Rectifier and it has it's own character distinct of the Mk series.

The clean mode was pristine and when the powersoak was engaged I could get a variety of breakup sounds between the master and gain controls. Using the coil tap I could get some real 3d sounding spank out of it. The RA maintains a very percussive quality throughout all three channels-- You absolutely feel it when you dig in to the strings. I would compare the clean to the MkV save the fact that the RA is much more punchy and I feel its much easier to dial in useable tones.

The LO mode was god in an amp. If you play raunchy blues or country-- this is all you. double stops blossomed with overtones. It sounded like sonic halos enveloping the notes. I don't mean that in a flowery poetic sense, I really just do not know how else to explain the phenomena that came out of the speakers. Very complex gain sounds. The amp sounds extremely thick and percussive yet completely articulate. Dialing back the gain to about noon with the attenuation can get you into plexi sounds pretty easily while throwing the gain past noon can get you more fluid gain.

The Hi mode can cover a lot of ground. It cleans up with ease and can be pushed through pretty much the spectrum of the entire amp up to some very mean high gain tones. When attenuated this reminds me a lot of the mkiic+ mode on the mkV. Bypassing the power soak on this mode is night and day. The power section opens up and sounds fierce. When you push the gain it wholly reminds me of my old triple rectifier just without the stale, lackluster feel.

It's hard to find a 3 channel amp with this sort of excitement factor-- especially at a price point below 2 grand. The RA-100 fills a gap between the fluid feel of the mark series amps and the sheer punchiness of the rectifier series. I owned both to balance each other out but the RA can stand on it's own and doesn't leave me longing for anything. I feel that the strongest competitor to this amp in the current market is the Bogner Goldfinger 45. Although the Royal Atlantic has much more available gain, I feel that both amps were designed with the same player demographic in mind and both are strong offerings.