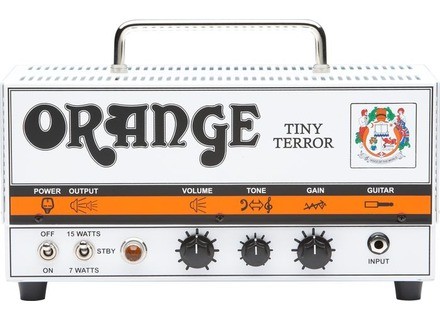 «  A powerful header MultiStyle! but also for big sound! »
5

Power of 7 and 15 watts selectable on the same switch as the standby, the power is really one announced! Empowered!

No effect, just volume, tone and gain and that's enough! very easy to use

Config 'mega easy! * with volume, tone * and * gain! no effects loop for cons

Was no manual but no need! it rotates and it is simply

We get it on its quality sound on! guitar plugged into a head without a pedal full report! Finally, a head that little push at full speed and having clear sounds of saturated extras! by simply acting on the gain

I play hard rock with punk and metal! I read below that could not do with this kind of sound? bah hum and of course that if I add even pedal on!
A grain super natural! halves of a volume is covered drummer ..... I Mettai compared to 5 with an old head Marshall JCM 2000 DSL 100! Orange and Mesa Boogie are real powers them!
In short I play ballads to the Scorpions with the gain to 4 and 2 seconds I put the gain at the bottom and go for big sound and solos that sing

Plugged into my Marshall 4 x 12 hp equipped Prominent vintage 30 it sounds live! I will also soon take me a baffle Fame in V30 equipped with 2x 12 ^ ^, the top would be the Orange for the look and sound but what a price! people and sells secondhand!

I play exclusively now on Gibson, I 3, a Flying V, a Les Paul Classic and Les Paul Vixen! is not to say, by combining these two big names can not be disappointed! not need multi-effects to the con!

I use it for 1 week but I had tested before zic store! and power and harmonics coming out by themselves had scored.
I also wanted to test the ENGL Gigmaster but nobody at the store or not reviewed here because the tiny terror is unlike Engl single channel and has no effects loop!
I served as head of repeated or other relief, because I also have a Mesa Boogie Single Rectifier! Brief 2 sounds different but each have their charms!
In short, a head that can walk everywhere and takes up less space than outright large while being almost as powerful! in a bag + shoulder strap embroidered Orange logo comes with

Super value for money! € 411 on MusicStore but I nabbed a 300 € secondhand 30 km from my house! brief you will find a lot of opportunities here or on "good place" but if you find it secondhand at more than 300 € it's theft because of its value on sites vpc! I'm glad to have the Orange because it is never disappointed with this brand! I recommend it! and gives both the reggae, blues, rock and metal!
See the source
Did you find this review helpful?yesno
Cookies help us improve performance, enhance user experience and deliver our services. By using our services, you agree to our use of cookies. Find out more.