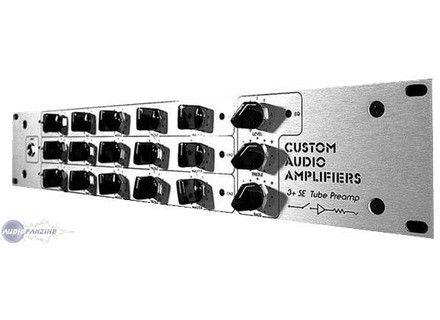 I publish here the test RALIS by Pierre Chaze for "Guitar & Keyboards" in 1995.
I thought that the magazine silent old, but still prampli NEWS aa can be so out of place here

The head pro is I fall for the rack?
Banco the combo?
The first two bodies?
So many questions on which looked mtaphysiques Bob Bradshaw, lighter lamp pdalier dispatcher signed the effects last system call Bradshaw, the Rolls Royce of the genre.

He silent when the rock the second gnration Marshall. Welders not deaf are born around Los Angeles. They customisent amps HROS of our favorites. Mike Soldano, his friend Bradshaw, Lee Jackson and a few other fans of 6L6, 12AX7 and 5881 make the sound of the 80/90. Let us not be surprised dbarquer on our distant shores, a DCEN only later, the box sounds of pre mathmatiquement Bradshaw called 3 +, which is used dj by the cream of us scratch.

You want my picture?

The machine is Submitted as a rack 2U mtal brushed gray. We therefore cot face from top to bottom: three advantages of knobs, one per channel (ch1 clean, crunch ch2, ch3 lead) and left-right, then lentre instrument, for each channel, the switch bright, gain, bass, mid, treble, master, an LED on / off and right at last, with the eq, from top to bottom, level, presence, bass, and an LED on / off. Tails are left-right switch on / off, an outlet fawn Marshall, fuses and voltage rglage, taking cannon to optional footswitch Bradshaw, three input jacks to drive, by footswitch or MIDI signal, the three channels plus the eq (as the cana1 switched default). Then there are two outputs to power amps, including a free land (to DViT closures mass) and, finally, an auxiliary input.

The 3 + has three pramplis tagement each with a grain of frequencies and a diffrent over a lamp post equalizer can boost the sound of 17 db in the spectra punch (bass) and cut ( presence). The level of eq 8 can also inflate the db level of each channel. The 3 + 7 is fitted to 12AX7 (as with Chinese Soldano and Marshall), a transformer and a torodal rgulateur heating lamps for better signal / noise ratio and a longer drive e lamp life (we can see the TRS level components and manufacturing). The pdalier optional black fawn Mesa, 4 footswitch is provided with each diode: ch1/ch2/ch3/eq. The EQ is switchable on each channel (which is dj 6 basic sounds). For the test, I used a strat-type guitar DNG team of two Texas Special single and a double Bill Lawrence, an N4 and a team of Hohner Revelation 3 singles David White. The tests were effectus console box with a direct boss DI1 and Mackie 16-track 2 and 3 lines of Genelec speakers 120 W each. Tests with power amps are made with 2 t Soldano Super Lead 100 and 2 Soldano 4x12 cabinets. For each config, I used a Intelliverb and mdiator nine.

Branch console, clear sound, one is immediately struck by the incredible density of sound, the grain is pressed rponse fast, give serious in the deep sag free, high frequencies are Light, silky Galissa around 10 000 Hz, which is unusual, as the standard 000Hz 6). Remarkable quality of mediums trs soft, velvety, that same background do not get cavities. No doubt, the Alien! Simulator would by HP against not a luxury. The sound keeps a small electro acoustic dimension steep climbs on high heels (with bright banned console) which do patchwork that when you switch the eq that gives the sound its flexibility and warmth. With DNG, the fingers are arpges a crystalline knopflerien with fine harmonic trs. In mdiator, there are easily SETTING THE SRV and rponse very rebounded with the groove. With N4, the use of Humber serious tends to overwrite the sound and more with the eq if you put the ball (almost phnomne pramp guests with a lamp and can be research). However, without seeking dbordement motional, trs prcises remain low (no effect barrel). Even when the zero-Tone guitar for sounds be bop, the 3 + does not bleed (trs before it is for his age). Revelation in rhythm with the funk, the 3 + has the pep and llasticit which we naturally amne 2nd channel. CH2: the amplitude of the grain on that channel called "crunch" is such that it actually has a lead channel sounds fat bluesy smooth to the Malmsteen sound like violoning Holdsworth, at the rate of distortion, the choice of frequencies and dynamics of attack. However, there is always the same NCESS to round and smooth sound with the eq in connection console just to have his stiff ... And now, big sound: CH3! If you put the bright, is the street of the bees. Stop! Phew ... Now we can copy DEFINITIONS will appreciate the sound. The attack of the spring, and even cash back, the notes are prcises trs. The mediums are singing without a head for 400/800Hz which is about the nose. In digging the rglages V (V as Van Halen), the total serious chouia mediums, 3 / 7 acute, it is the caliber of trononneuse only feature in adults (although you will resume some Pantera?).

Nothing like a comparison test to better understand the qualities and the default of 2 pramp premium. Right on 3 +; left one of the best pramp German. The Teuton: Clean thinner, less dense but more flexible. Crunch and Lead prcis warmer but less and less solid. The teissiture of frquences is much less tense and there are a lot of breath. Redcouverte the great white silence of 3 +, the finesse of its outstanding treble, bass and lnormit the length of sustain. Saturation Rican fuzz is a little rtro same, but it has a lifetime of relief and thunder as the dynamics of the game or guitar volume changes. What is surprising, finally, is the plnitude sound, its precision, the spring of the attack and, to borrow an expression from C Cailler "the sound of propulsion". Enfourchons now the amp and speakers for the lcher mgatonnes. With two power amps and two speakers Celestion Soldano, in the bright clean is beautiful, the roundness of the bass and treble the dlicatesse to play hard without taking the mug. on the other hand, and unlike his work in raction console, eq tends to give less DEFINITIONS sound and make it a little soft. In crunch, the sound is pure trs, smooth fawn Scott Henderson, the grain is tighter than console and even the texture of the saturation is more contemporary (less fuzz). In lead, it makes all drle to agree to play with the sound of Steve Vai in "Passion & Warfare"! Harmonic sparks thanks to the bright, serious and enrmes compression, attack of a rapid prampli transistors or MOSFETs, but without stiffness. However, this form of perfection tends to miss a few songs and characters. In some extreme rglages the eq makes the sound a bit confusing but at the same time Ramna a big cot Gozilla Terminator that takes you both hands. He had t trs difiant to have a power amp lamps top level (like VHT) to test the bird with 4x12 celestion speakers. It was pay. But the VHT ntait not available. So you can even vrifier you at your regular retailer of Ralite or not the ultra chic wedding prampli Bradshaw / power amp VHT/4x12 Celestion or, if this can not be done, costs Lukather , Vai, Hammet, etc.. A lvidence This is pramp Luvr a manic whiz rpondant pending the virtuoso fingers 11 in California. But if you like vintage amps prhistoriques or reissues that have evil characters but good heart, the 3 + can be is not the solution. Anyway, as always, it is best to try it yourself!

This is the lamplighter who pays.

No effects loop, the pdalier in addition, a mine as a gray look, buttons coming straight from an Amateur Radio kit: You really love the tube sound because for the slate of 2U, will have also "racquer" 2U). So what have you to say in your defense, kid? Well, with Bradshaw is the canning and the simple device of a Twin, a Marshall and a Dumble overinflated. We are putting the stuff of day rve guitarist in search of his lost. In this qute continually renewed in this race inteminble weapons, and pending the next dernire wonder, this one (3 +) should allow you to take at least until &#39;2000.
See the source
Did you find this review helpful?yesno
Cookies help us improve performance, enhance user experience and deliver our services. By using our services, you agree to our use of cookies. Find out more.