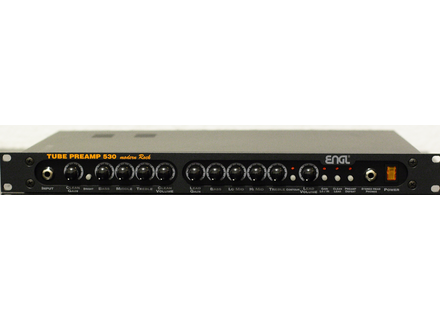 View other reviews for this product:
See previous ...

Setup could not be more simple. The manual may be necessary to connect them alternatives.

Then move on to the interesting game. I am rather orient metal in all its forms, but I also use beaaucoup the clean and crunch, which has my eyes are just as important as the saturation. I play BC Rich NT JR V Deluxe (edition 2008) and a Dean ML 30th anniversary (not the US version eh ^ ^). Branch Technologies DBX EQ in a dual channel (roughly two bands eq 15 in series), followed by a small multi Korg AX 3000G to go through a Rocktron Velocity 100, which feeds a baffle 412 MG and a home marshmall homemade cab equipped with V30. Then I will speak of her in bypassing the EQ. So the raw preamp. In clean, not bad, the gain control is doing its job. A crystal clean enough, but lacked a little fishing, a little pale what. By switching on the High Gain channel clean, we get a nice crunch natural enough if one led zepplinien is doing well. The EMG of the BC Rich are a little crunch in clean normal, should lower the volume of the guitar. By switching to overdrive, one is soft. While disappointed. Sounds dirty, really worthy of a Crate 15W low series. Its a very "rough" without depth ... advice to those who want to return Transilvanian Hunger. BUT! Once the branch in eq Bouzin is really perceives what the beast is capable of. The clean is just sublime, as much for a stroll bluesy, its edge as a typical rhythmic funk or reggae, or what's so typical of the guitars of the 80s, when thee mad max a chorus. Adding a little reverb, the sound becomes a purity foolproof. Geniallisime. It's the same for the High Gain mode sound clean. And then I would not even speak the Distortion channel. A killing as rarely see thee home. Sound so versatile you can do everything; of saturated fat rich in many low and medium compresssion that the distortion of Empowered Gojira, as well Heavy Drive has the Maiden, Slayer and then the ... Sounds rich medium and treble to the Immortal, or a well wokenwol Motorhead has, through the well to the batcave or Alien Sex Fiend Bauhaus ... Really quite incredible. In addition, it blows really not bezef (saus sucks when you're big and you doing your back a gain, but in so you have to do push a 6 or 7). Overdrive is a regal heat.

When you connect your config your sound card via the exit "Emulated out" or I will not know, the thing that you simulate the response of a 4 * 12 Cab ... And ben the same, if not forget you to go through the EQ, you're much more than sound good for a small EP or demo. It goes far beyond what you can get a Pod or a Korg ...

It's been 6-7 months I use it now, really still surprised at how many things you can get out.

Without an EQ output, it is worth nothing absolulment. But that the brothel industry you there is just too good. What I like most: almost everything. What I like least: its price (600 balls a lil preamp unpretentious and worth nothing without additional eq, ca is the way ...), the footswith you have to pay 25 euros a share. But my rack (tuner, ENGL, EQ, multi-effects, Rocktron Velocity 100, noisegate) cost me less than 1000 euros, it is completely customizable, and I get a distortion worthy of a small lamp or almost any randall d a powerball. As for the clean, it goes beyond that of the two preceding deficits.

Bn invesstissement, nice surprise, good stuff. Is not a shit, they are strong the Germans!
See the source
Did you find this review helpful?yesno
Cookies help us improve performance, enhance user experience and deliver our services. By using our services, you agree to our use of cookies. Find out more.