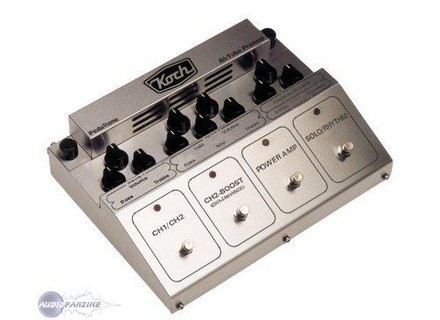 PedalTone, Tube Guitar Preamp from Koch in the PedalTone series.

Value For Money : Excellent
View other reviews for this product:
It is a prampli floor lamp with any connectivity trs trs complte: output power amp; effect output to return to between instrument and amp for direct recording ... an effects loop.
This is a two channels with the possibility of boosting the signal with different switches.

Until it is without the fault is a gate just in sound (hard to excel in all areas with a small price). The sound is a way gnrale very (too?) And quite dark medium. sounds a bit a mesa. Rglage the treble is not effective enough and does not go far enough. With this disadvantage can not get everything we want, we must love, or he must then necessarily investing in an equalizer and even a hush as the beast breath a lot in the saturation shoots.
Essay in a power amp Marshall EL84 20/20 the result was not really top, one can even say that it was ridiculous compared to the Soldano SP77 that I usually connects and is in the same price range .. . 5 / 10 in the config '. branch between the instrument is better but not transcendent (6 / 10) and this live recording in my computer that the result was the most convincing and very surprising. With it you can move from one pod and record tracks with a very sound and well raliste pais (9 / 10).
At the grain is easy to play, enough fat in the high gain, the notes are linked and high saturations allow a lot of posturing, which is rather nice.

Finally with the koch is like a Swiss Army knife, made a lot of things but not 100% effective in use. Its big advantage is that it is complete level connections, channels and it has little conccurents (preamp pedal lights). After all depends on what you want to do but be aware that you will not sound high-end preamp with the exception of live recording. For me it is a good mid-range but it is light years away from my Soldano preamp that does little but.
See the source
Did you find this review helpful?yesno
Cookies help us improve performance, enhance user experience and deliver our services. By using our services, you agree to our use of cookies. Find out more.