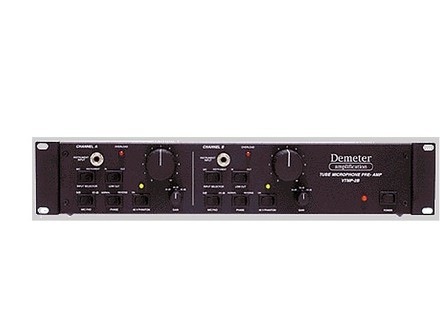 VTMP 2B, Tube Pre-amp from Demeter.

The Demeter VTMP 2B is a two channel tube microphone preamplifier. I believe it was first issued in the 1990's, but I don't know all that much background info on it. I've been using the VTMP 2B for a few years as a producer that I work with had it in his old studio and now has it at his home studio. It's got XLR connections in the back and 1/4" inputs in the front for using it as a DI. It is rack mountable and will take up two spaces in a traditional casing. I don't know what kind of tubes you'll find in the VTMP 2B.

The Demeter VTMP 2B has the full spectrum of controls you'd want for a preamp. It's got large and small gain knobs for general and finer control, as well as buttons for phantom power, phase, a -10 db pad, and low cut. It's easy to use after you peruse it for a minute and see all of the features you're dealing with. I haven't seen a manual for the VTMP 2B and don't expect to be searching for one any time soon.

The sound of the Demeter VTMP 2B is pretty great. It's versatile as it can be used for a variety of purposes, but most recently we've been using it for drum overheads and room mics at the studio. They are very full sounding without having too much saturation as you'll find with some tube preamps. It works great as a DI as well, which isn't surprising because they've got some great DI's on the market as well. Not too many people know about the VTMP 2B, so they could be a steal as far as tube preamps go.

It took me a little while to realize how much I liked the Demeter VTMP 2B. While I was using these at the studio they were previously located at, they were kind of a back burner preamp since we had a console, but now that they are in more of a home studio environment they've come to the forefront a bit and have do a fantastic job. Since I wouldn't say they are popular, you can find them used for a very nice price for two tube preamps. If you are after some tube preamps and don't want to spend a ton of money but want something professional, I'd absolutely recommend the Demtere VTMP 2B.