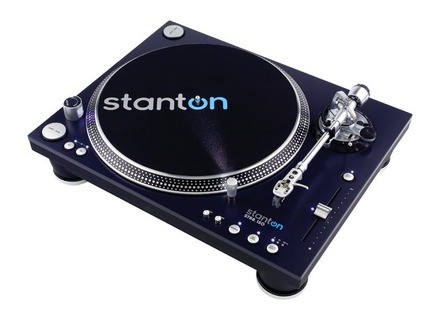 Value For Money : Poor
View other reviews for this product:
09/2007

Just a few lines to give my personal opinion on this deck, it's a bomb. I had mk2 for 5 years, it has been two years since I and the technics are not M5G foto, qualitprix report, the stanton cartonnent. The point that I think I'll sell my M5G to buy them. A couple impressive engine power (more than double to rappport technics), a pitch more powerful (with the Custom + 16% of me has M5G enough for me but the MK2 + -8% of it becomes a little short ). For now we are all (ten dj) agree that the platinum market. The big question will be whether it gives Longva. But for those who are not yet aware, even in technics is as before. And yes these are now crtins like everyone else, and has since age 5 or 6, they manufacture in China. Everything has to say that as I speak, the stanton is THE buy platinum. Why? MK2 pitch problem. M5G, too expensive for what it is (or then OCCAZ or abroad, has the worth, what I have done). Vestax has is worth more than what was worth on the first model. And then I've ever personal aim. Numark TTX, they had a lot of engine problem on the old gnrations is now waiting to see what was going to give out on Most recent internship but it's still too tt I think for able to trust them. Voila voila, I think I made the rounds. We all know we're talking high-end ii of each brand, so there are no pictures, even when they are all fun to use (I have all essays) and there are ways to make fucking set with all (even when it is not the gemini). But if you want to invest such sums, it's normal we want the best qualitprix. Come on, all right mix ...

All right, I sold my Technics M5G and bought the stanton. No regret, on the contrary. Agree with the problem of feedback tapping but it does not impede me at all. It's really the only ngatif. Ending for the death of technics !!!???
See the source
Did you find this review helpful?yesno
Cookies help us improve performance, enhance user experience and deliver our services. By using our services, you agree to our use of cookies. Find out more.