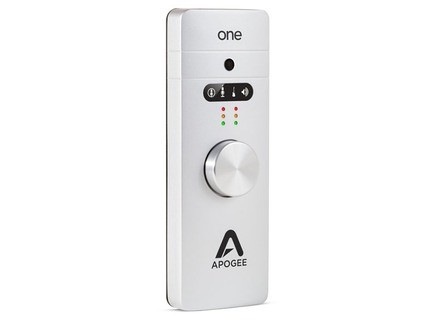 +
Apogee One for Mac

One for Mac, USB audio interface from Apogee in the One series.

[MUSIKMESSE] Apogee One for Mac

Apogee ONE is an all-in-one portable, USB audio interface allowing to make quality recordings on the go. Users can connect a microphone, guitar or use the One’s built-in omnidirectional microphone to easily capture music - plus, One lets you record with a microphone (built-in or external) and guitar simultaneously.

Using Apogee’s renowned AD/DA conversion and mic preamp technology, ONE is said to produce pristine music, podcast, and voice-over recordings while also delivering high quality sound to your headphones for precision mixing or hi-fi listening. With an intuitive controller knob and seamless compatibility with Mac OS X, One is said to be particularly easy to use and to work great with GarageBand, Logic Pro X, Pro Tools, Ableton or any Core Audio compatible application.

Also, buying and registering a new Apogee One provides exclusive access to special prices on Waves audio plugins through a discount code good for 25% off a single plugin or 35% off any Waves bundle - plus an additional $100 credit towards a further Waves plugin purchase.

Apogee's One for Mac is announced for May 2016 at a MSRP of $249 - a hundred bucks less than the Mac & iPad version. More at www.apogeedigital.com.