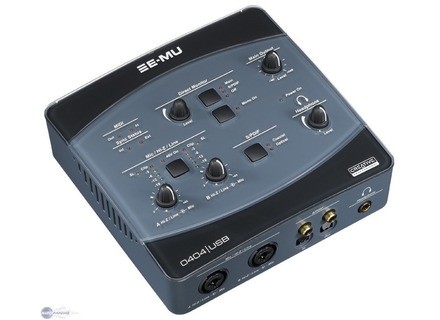 Value For Money : Excellent
View other reviews for this product:
What characteristics have motivated your choice?

The fact that it is equipped with the famous "Miracle DAC" There's probably a lot.
Admittedly, I use my PC to listen bloated disco (99% of Flac, ape, wavpack, mostly with very good quality) and I was tired of the sound of my old Terratec.
The external box is also a plus (knobs, easy and safe connection) even if I only use a fraction of the possibilities.

For now, I do not register, but it will come (I scratch a little acoustic guitar

The drivers are stable? Yes, no worries Soux 7 or XP Pro 64 bit, although I prefer not to rotate with a Beta driver ... but hey, I must say that for me it makes no difference.
How often are updated? I think yes.
It should nevertheless not lose sight of what many have already pointed out before: ASIO only very desirable, if you want to overcome the vagaries of Windows.
What software do you use most often? Following livére not serve me very little. I use Foobar and J River Media (thus reading)

The installation is done it without problem?

No worries for me, but I have a long history of PC, it should help. Anyway, I never had to complain. With that said, with low-performance PCs (an old P4 3.0 HT Shuttle and 1.5 GB of Ram and a lot of périphériqueriques in USB1 and 2, caused at distant crackling, resolved by relieving the USB ports ... perhaps a matter of bandwidth?
Anyway, it seems to me not made to support the antiques ... (why there PCI cards, it seems to me, just as good but less-demanding system resources)
Have you encountered any incompatibilities? No, just a small bug in Foobar when changing sampling. This bug does not occur elsewhere in foobar (which does not store the oversampling, it is up to 44.1 kHz) and nothing seems to indicate that the card is there for something ...


The general configuration is easy? Very
The manual is clear and sufficient? Manual mainly useful for info (at the hardware level anyway) and quite comprehensive. For those who want to delve into the software, it's light, on the other hand ... but hey, we can say that it must be often the case with suites also charged.

How long you use it? 4 years (mid 2008 purchase)
What is so special that you love the most, least?
The sound: incredibly bright, airy, super-aggressive but sharp and chiselled. A jewel that does better than any CD player I had and I've had at least five, including some very expensive.
The qualifier Miracle DAC was far from being usurped!
Did you tried many other models before buying it? No, I knew the advanced chipsets (Azalia, supposedly the top, but pales compared to 0404) and Terratec 16 bits (not terrible, trumpets aggressive, non-existent ventilation, poor stereo) not to mention a phalanx of Guillemot (Yamaha) and Creative (SB Live, sometimes very very good) through the years. But even before the purchase, no other test. USB, its rivals were almost nonexistent at this time, it has faciliét choice ...
How would you rate the quality / price? Super,
With experience, you do again this choice? Meanwhile rivals came out in quantity and it is no longer for sale secondhand ... but I will not hesitate! Anyway, the new USB O202 sounds worse. I borrowed because I wanted to equip a second PC, but I was not even more, it sounds good but it is still behind the 0404.

With experience, you do again this choice? ...
No doubt! I love him as I freaking going to Win 7 have to do without. I know I need to find both, but I do not think I'll find one day sound better than that.
As it will turn on my PC, I keep it!

I confess I do not understand that this card is so little star while it's a gem (well, aesthetically, it's way ... but hey, among serious people who cares!)
See the source
Did you find this review helpful?yesno
Cookies help us improve performance, enhance user experience and deliver our services. By using our services, you agree to our use of cookies. Find out more.