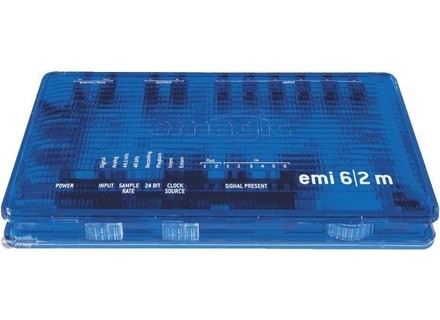 View other reviews for this product:
Read the other reviews
The Jack and XLR connectors could've been of better quality, even if it meant having a bigger soundcard.

The installation is disastrous! It's really chaotic! Under XP, it's a pain. I often have to reinstall the soundcard because it isn't recognized anymore. I have also experienced some problems depending on the USB port used. For example, if you install the soundcard on any given USB, it won't be recognized if you connect it into another port...It's bizarre.
Since I had some issues with XP, I tested the card with Windows 2000 on two different machines. It works better, but the installation is very chaotic (even if you strictly follow the recommendations in the manual). You need to look for some files on the CD-ROM by hand to install them because the installer doesn't find them...

I work with Logic Audio 5.5
I only use it for audio, O% midi. I had lots of problems with XP, that's why I switched to 2000. However, certain MIDI functions can't be used under 2000 (see the manual).
But it works very well with audio, with a very low latency.

Notwithstanding, since it's a USB card, you can't use software monitoring under good conditions. 14ms of latency are a must, with 12 ms it's a disaster.

I've been using it for 3-4 months. This card isn't the best for my needs (audio only without a mixer, so I need software monitoring).

I think the installation and drivers aren't very serious. I wanted a unit that worked fine and was stable...to make music without having to fight my computer...Fail!

Verdict: I will return it to the store and get an M-AUDIO Delta 44 or 66, which ought to serve me better.
Did you find this review helpful?yesno
Cookies help us improve performance, enhance user experience and deliver our services. By using our services, you agree to our use of cookies. Find out more.