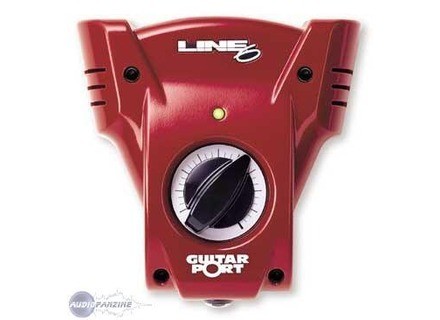 View other reviews for this product:
I use it on a desktop PC, nor balèze than others. For the laptop, I'll say it later. No conflict with my MOTU 2408 Mk2. Hell it works with Cubase SX.
For controls, I have a pedal Behringer FCB1010, via a MOTU Midi Express XT.

The config is simple. The start, like any USB printer or camera.
The edition, well if we had the pedals, it is clear, at least! Controls via the pedals are a treat, you can change the rate of reverb or flanger, for example with the second FCB pedal.

The only problem I had was my laptop (Asus A6). Well, OK, it's not planned for, with its multimedia chipset? USB bad timing, his stall, crachouillis ... So, with my friend, we examined above: a hub, powered or not, ... nada, that clicks! So, in short, we tried with Cubase SX, by keeping the Asio Guitar Port, then in there, It's the miracle! To you the rhythm, the solo, the response to solo, the casseroles & Co. While reading the audio tracks, of course. So simple, but it had to think!
Not explained anywhere, so that 9.

Effects, it changes me a good old Yamaha FX 550. In addition, version 2 brought an acoustic amp, a treat for my Ovation nylon. Otherwise, my Vigier Passion 2 love it, like my Apex uncommon.
I regret it is impossible to get a low (this is not recommended, unless you want to grill the chipset!) So, we should sell it to buy the new Tone Port of the mark that is all? Okay, if not need, well ... A DI box for my bass Apex enough. But it is impossible to upgrade the chipset for low? while 9!

I've had 2 or even 3 years! It is very practical in the studio, his sound is chosen, there is agreement before taking, and presto! In addition, we can reduce the breath of the guitar ...

For cons, the least? I just hope they're going to fix it one day:
No table-Change Program, which prohibits the use almost live. Ultimately, it responds by changing the amp head, but it is not the intention. Yet with a laptop, a pedal, it would at all! Well, OK, sounds are compatible with échageables in POD XT, but it fo have both! Why so much hatred? Go, M'sieu Linecisse still un'tit effort, sioupli? Otherwise, I drop the note.

But ultimately, I do not regret my purchase.
See the source
Did you find this review helpful?yesno