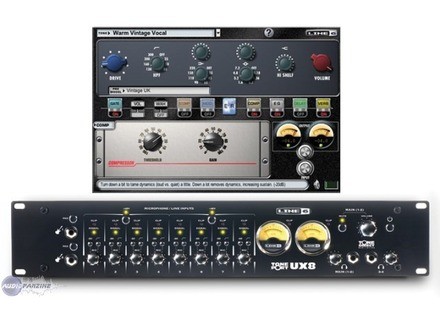 When the conceivers of the POD took on audio interfaces, the result was the TonePort, a veritable toolbox for home studio owners. Now we'll be taking a look at the new version that features 8 mic preamps: the UX8.

When the conceivers of the POD took on audio interfaces, the result was the TonePort, a veritable
toolbox for home studio owners. Now we'll be taking a look at the new version that features 8 mic preamps: the UX8.

Not satisfied with their success in breaking into the home studio sector with its Toneport UX1 and UX2, Line 6 has added to their product line-up with the UX8, which features 8 Analog preamp mic/line I/O's, S/PDIF I/O's, 2 instrument inputs and a USB socket. The numerous mic inputs should please guitarists who have been itching to record their drummers but who never had enough mic inputs.

Once the box is opened, we find ourselves face to face with an interface in 2U rack format that’s rather pleasing to the eye. And even though the knobs seem a bit flimsy, it has a more serious look to it than the rest of Toneport series. Thanks to the metal frame, the toy "aspect" of many Line 6 products, is gone.

The first thing one notices are the two VU meters which, by default, indicate the levels of inputs 1 and 2. They can however be assigned to any of the UX8’s inputs or outputs. A red led will warn the user when the signal clips (reaches 0 dBFS). Unfortunately, even though the VU meters look professional, they’re not very precise and therefore not very useful.

As far as outputs go, there are two headphone outs, each with its own volume control. This is a nice initiative on the part of Line 6 since most home studios don't have cabins, and so, when recording a singer, this allows the latter and the person doing the recording to each have their headphones on and to be able to turn off the speakers to avoid having the mic picking up and recording what comes out of the speakers. There‘ s also a general volume knob with a mute switch, which definitely comes in handy when one « does » forget to turn off the monitors while the mic is connected...

When we turn the UX8 around, we see the 8 jack (6,35 mm) symmetrical outputs, the coaxial S/PDIF I/O's, the USB socket, two jack footswitch inputs and one Expression Pedal Input (for Wah Wah, & Volume, etc.).These inputs can be used to connect the controllers of Gearbox, the software amp modeler included with the UX8. As for analog inputs, in the back there are 8 XLR mic inputs, and 8 (asymmetrical) Line inputs in jack format (6,35 mm). Nomads should be warned: the rack can't be powered by the USB socket and needs to be plugged in to work.

Lets take a look at the software end of the UX8. First of all, just as with all Line 6 products, the interface is compatible with Monkey, which will allow you to check if your Line 6 gear is up-to-date with the latest drivers and software. In fact, this small utility not only verifies that you have the latest version of the UX8 driver, you also have the possibility of buying supplementary sound banks (more « metal » oriented for example). As for the driver itself, it's pretty standard with it's sample rate (up to 24 bits / 96 kHz) and buffer (128 samples minimum) configuration. With my setup (Intel Core 2 Duo à 2,4 GHz / 2 Go de RAM) and latency at the minimum setting, the system didn't crackle or show the slightest sign of overload or slowing down. A good point!

By using the input tabs, you can choose a level for each one: Line, mic or even instrument for the first two. You can even create stereo pairs for inputs 1 and 2, 3 and 4, etc. Note: you can't connect a mic and a Line signal (CD, Synth...) in the same
input. The clock can be configured internally or externally.

In the ‘Output & Monitoring’ tab, you can assign an output to the rack’s two VU meters and especially the direct monitoring volume and pan adjustment of each input and also for each output. This lets you create many submixes and to assign them to the physical outs (1 to 8). This comes in handy when the singer wants more guitar in his/her headphones or the drummer more bass: this way everyone has their own output and mix, and everyone's happy. Because the UX8 has a second headphone out (outputs 3 & 4), it's really easy to make a submix for any musician who comes to your place to record.

Gearbox, the amp modeling software , also has its own adjustments for volume and pan.
Speaking of Gearbox...

The real strong point of Line 6 audio interfaces, including the UX8, is the accompanying amp modeling software: Gearbox. Line 6 has already proven itself in the amp modeling sector and the POD’s success story just goes to show that this manufacturer is the leader in the arena. With Gearbox, Line 6 has offered us a kind of virtual POD that's in both stand alone and a plugin format that’s compatible with most sequencers

Guitarists will no doubt feel at ease with the interface: the amp looks like an amp, and the pedal board is visible on the main page. At first glance, it seems less complex than other amp software such as Native Instrument's Guitar Rig or IK Multimedia's Amplitube. You can access the pedal controls by clicking on the pedal (stomp box) in question, and you can also quickly activate it or deactivate it,... in a nutshell, it's quite user-friendly, especially for POD owners. So what's the advantage over a POD? The answer is: re-amping.

With re-amping you can plug your guitar into an amp (or a modeled amp) "after" you’ve recorded it. Once the stress of recording is finished, you can tweak your sound, change the amp...the sky is the limit. To do the same thing with a real amp you'd have to buy a re-amping box which would adapt the level that comes out of your sound card or console to the level of your amp input. With Gearbox, no cables are needed: just run the plugin in your favorite sequencer and insert it into the track. Your audio interface records the direct (untreated) signal from your guitar and then sends it through the amp modeler. The only problem: this takes up CPU resources during the mixing of your piece, since it need to treat the sound. If you apply Gearbox directly to the recording, you won't be able to change the sound once it's recorded. But you do have the choice, and that's the main thing. As for choices, there’s quite a bit of choosing to do with the its 18 available amps, 24 cabinets, 5 bass amp models, 29 Pedals (stomp boxes) and 6 mic preamps.

Using Gearbox in plugin mode allows you to have multiple instances at the same time. You can therefore record two guitars (or a guitar and a bass) simultaneously, each with their own sound. If the singer wants to use an amp simulation on her voice, just run another instance on another track. The only limit is your computer.

OK, but how does it sound?

We’ll start with Gearbox which, it must be mentioned, is related to the POD, a fact that becomes clear when you plug your guitar into the UX8. It has the same strengths and weaknesses: it sounds clean, too clean in certain cases? Guitarists used to their tube amps might be troubled, and who could blame them; here's a sound that simulates the tone of an amp recorded by a mic and ready to be recorded. It's as if you were playing next to the mixing console in a studio and the amp was on the other side of the glass, in the recording room. The «vibrations » you’re used to getting from your real amp are absent here. That's maybe why some people are disappointed when they try an amp modeler for the first time. The sound is a lot more compressed and some nuances are lost. But this will probably help you, in most cases, to fit or blend your guitar into the final mix of your song. In the end, Gearbox is basically a recording tool.

I was lucky enough to have had in my possession a POD X3, so I was able to compare the software version with the hardware version. In general, the sound seemed flatter with Gearbox than with the POD X3and compression was more prevalent. Line 6's hardware simulation seems to be ahead of their software counterparts, but maybe an update (one of the advantages of software) could close the gap. Nevertheless, in the end, I was able to get some convincing results out of both interfaces and I'm sure that most people could find something they like within the multitude of modeled amps.

Lets check out the hardware side of the UX8. I recorded an acoustic guitar (a Takamine EG-10) with a large diaphragm condenser mic (an Audio-Technica 4040). Since I own a Presonus Firepod (a digital-audio firewire interface also equipped with 8 mic inputs and belonging in the same price range), I was able to compare both interfaces. As far as sound is concerned, the UX8 held its own: I noticed only a few differences and neither interface really outshone the other. I was pleasantly surprised by the quality of the UX8 preamp which, even though it has less headroom than the Presonus preamp , still gives a good sound. One must be careful with mics that have a weak output signal: the preamp gain knob reaches its limit pretty fast. I activated the high-pass filter on the UX8 to make sure that it was working, and actually, it worked quite well. Here's an animated spectrum analysis of both interfaces while recording the aforementioned acoustic guitar.

As far as the converters are concerned, I made a few measurements with Right Mark Audio Analyzer, and the results were very convincing. See for yourselves: 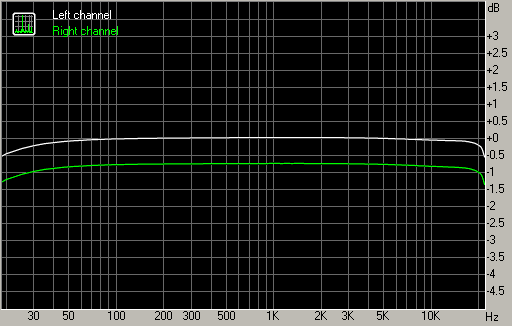 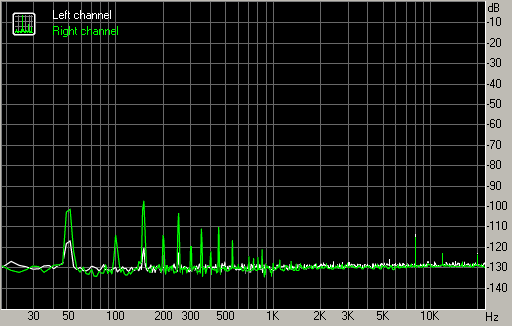 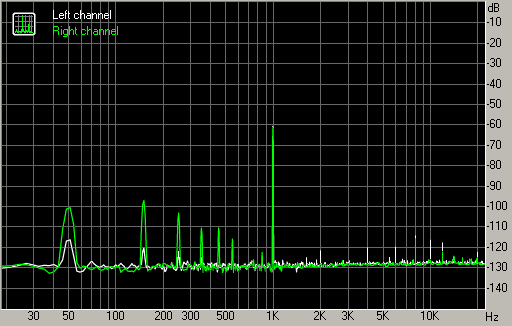 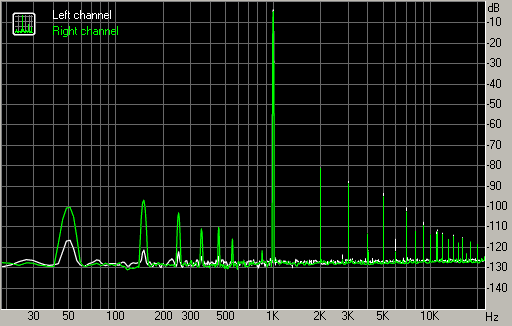 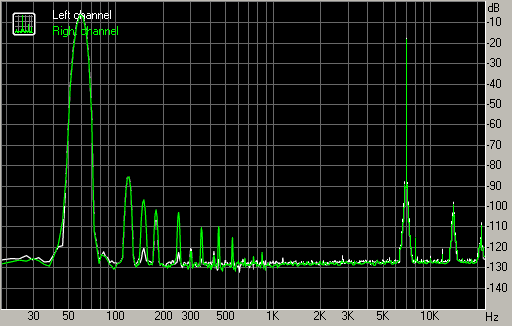 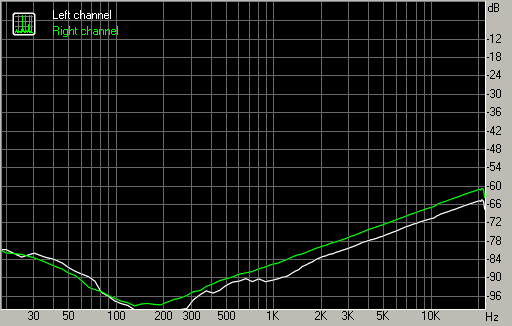 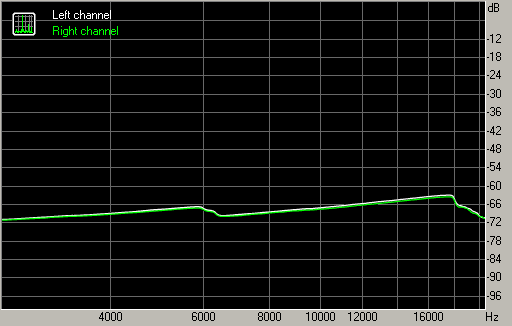 The UX8 has a lot things that could attract guitarists who want to record their whole group, including the drummer. On both the software end ( Gearbox is a success) and the hardware end ( the preamps and converters give good value for the money), Line 6 has pulled all the stops and will surely make the competitors a little nervous with their aggressive pricing (usually around 549€ ). The only flaw comes from its visual aspect which won't be to the liking of everyone (at least not to mine) and its cheap flimsy knobs.


To sum up, UX8 is a very complete solution for guitarists/home studio owners who want to try recording and produce everything themselves.