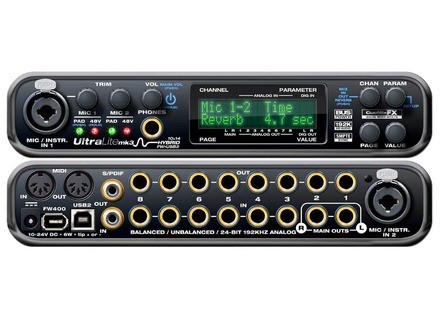 «  Compact and versatile, but handling not so easy »
4

Buy this productView price information >
View other reviews for this product:
It is a USB or Firewire audio interface, equipped with 8 inputs (phantom power supply with 2XLR + 6 jacks) in a very compact, compared with a whisk. It can be used in stand alone, without a PC.

I bought it at the time to record vocals and guitars in a home studio for electro rock project. Since then, I also used to record 8 tracks in my rock band.
I use it on PC and Mac, Cubase, Logic and Reaper, mostly USB. Motu does not offer driver for Linux.

A black spot is its stability. I've had a few blue screens, but it is so exceptional it is not yet gone through the window (against, in a live, AC can be a problem).

Its ergonomics are not the top, but the defects of his qualities.
Optionally, it can be adjusted directly through the few front-panel buttons or PC via the supplied software.
The facade is laborious adjustment: 4 buttons to 8 inputs (with compressor, filters and reverb, ...) That's a lot of menus and submenus. Feasible, but the risk of tearing their hair.
For cons, the software is not too bad and, ultimately, is what I use all the time to adjust.

Finally, once adjustments are made and saved, it is very convenient. I use my home (in home studio) and repetition. It stores up to 8 tracks simultaneously with a relatively low latency.

No problem with installation on various PC and Mac on which I use.
Only the grip is long enough, but the manual is dense.

I have been using 2 / 3 years now.
I had a Lexicon Omega before the recording quality which left me on my hunger. With preamps and converters of this Motu is the day and night, and it is his main quality: excellent sound quality, good connectivity, and easily transportable.
on the other hand, it takes a little patience to learn and configure it properly.

As for the price, I found it a bit expensive to buy just to save his guitar and singing at home. But ultimately, it can replace a small mixer for a rock band, and there, it's worth it.
See the source
Did you find this review helpful?yesno
Cookies help us improve performance, enhance user experience and deliver our services. By using our services, you agree to our use of cookies. Find out more.