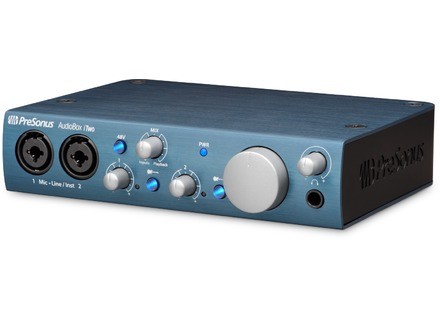 PreSonus introduces at Summer NAMM 2014 two new Audiobox audio interfaces that are class compliant for use with Mac, PC and iPad.

The new PreSonus Audiobox iOne and iTwo are powered by the USB 2.0 port and allow for recording audio with a maximum resolution of 24-bit / 96kHz, as well as MIDI. They ship with the Studio One Artist DAW for Mac and PC and iPad users can download the free Capture Duo app or purchase the Capture app for iPad for 8.99€ at the AppStore (more in the next news) for 32 track sessions.

Both audio interfaces feature zero-latency monitoring via a built-in analog mixer (fixed 50/50 mix on the iOne and adjustable via the Mix knob on the iTwo), a large volume knob and LEDs for signal presence and clipping. A Kensington security port is also available on the back of both metal boxes.

The Audiobox iOne feature a one microphone input with Class A preamp and 48V phantom power, an instrument input, two 1/4” line outputs and a headphone output with dedicated level control.

The Audiobox iTwo doubles the number of available inputs (two mic, 2 switchable line/instruments ins), adds MIDI in and out and also includes two line outputs and a headphone output with its own level control.

Both interfaces support Core Audio for Mac and ASIO for Windows. Note that the PC/Mac and MFi (iOS) connectors are independent.