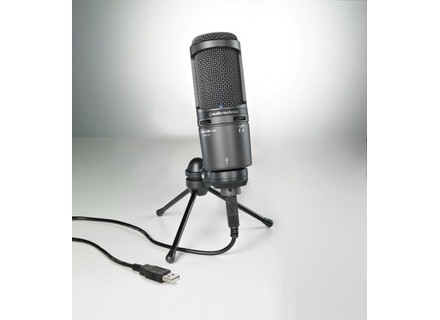 Mr. Plus
By Studio enregistrement Paris 18 MontmartreRecording on 12/10/2013

New product in sight for all home studio owners looking to save some money and space in their studio or bedroom!

Half-mic, half-soundcard, the Audio-Technica AT2020USB+ is an improved version of the AT2020USB. This cardioid mic was conceived to spare its users from having to own a soundcard, a mic preamp, etc. In short, the perfect tool for the mobile home studio!

A mic to record anything

In their quest to reduce everything to the minimum, and after introducing mini-jack mics, manufacturers became interested in USB for their newest generation of low-priced microphones. Since USB cannot be considered but an audio device by software programs, its concept differs from that of "professional" digital microphones, which are meant to be connected to a digital interfaces by AES/EBU, S/PDIF, etc.

Why? Connected to your computer, this mic becomes the only audio device of your system. It replaces the soundcard and the input/output/speaker circuit of your computer. The manufacturer included a headphones output, a knob to control the volume and a new feature that distinguishes this mic from the previous version: a Monitor MIC/COM(puter) knob to adjust what we hear, the sound of the mic (without latency) in MIC position and the sound of the computer in COM position, or a mix of both. Clever!

The downside is that it will be complicated to use another mic with the AT2020USB+ or with another device, like a soundcard, for instance. Unless we configure an additional device, but depending on the software used it can lead to sampling rate conflicts (material in 44.1 kHz or 48 kHz), malfunctioning or bugs when one of the audio devices is missing, or worse, to word clock problems...

On the box, the AT2020USB+ presents itself as a black and fairly elegant large-diaphragm condenser microphone. It comes with a mic clip and a small tripod which allows it to be placed right in front and save space. A blue LED indicates its activity once connected. 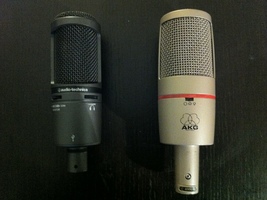 Its obvious that the main interest on this mic has to do with its convenience. Nevertheless, to see what it really hides inside we compared it to an AKG C4000B, which is the mic closest to the AT in terms of price ($500) and category that we have in the studio. The configuration used was the following:

The C4000B went through a Phoenix DRS-8 preamp to then be converted with a Lynx Technology Aurora 16. For the AT2020USB+ we used its own preamp and AD converter. 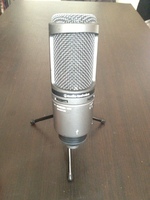 • Cajón: both recordings are relatively similar. A point for the AT because it costs way less. However it was necessary to increase the distance during the take to avoid distorting the signal (we put the AKG at the exact same distance), because unfortunately the preamp of this mic doesn't have any gain! Reducing the input volume in Apple's System Preferences doesn't avoid saturation, only lowers the digital signal's volume, because the distortion takes place at the mic's AD converter! So it's better to leave the fader at the center by default. It will be hard to record drums or percussion without degrading the signal...

• Guitar: we observe better accuracy in the high-end with the AT and pretty clean mids, which gives the whole a good coherence and balance. The AKG has a less musical frequency response, with the highs seeming a bit soft. A very good point for the AT!

• Vocals: just like with the guitar, the AKG sounds a bit dull in comparison to the newcomer, that captures and renders the voice's frequencies brilliantly, very open and accurate in the high-mids and highs. To avoid distortion or proximity effect it is recommended to sing at a distance from the mic, since it has a very generous gain.

This mic is extremely interesting as a single device within a minimal home studio installation (without speakers, soundcard and other mics). This means that you don't need anything but a pair of headphones, your computer and this mic to have a simple and mobile setup to record! Moreover, technically speaking it can stand up formidably well against a higher priced traditional mic.

On the other hand, it will hardly find a place within a more ambitious setup because it was conceived to be independent and its operation differs completely to that of traditional analog mics (works only with a computer, needs a USB cable, etc.). A good buy for a very precise use in mind: a reduced setup with a mic close to the computer to record vocals or acoustic instruments, as long as you keep away from percussion instruments.