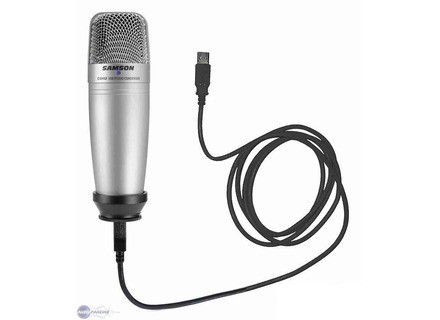 View other reviews for this product:
The C01U is a large diaphragm condenser microphone. It is not a normal microphone that you would find in a studio. This one actually can connect right into a computer! That is really convenient if you don't have a lot of gear and you're just starting off like I was when I bought this mic. The sound of the microphone is just okay. It really doesn't sound perfectly professional because the sound is a little bit degraded. It doesn't sound as smooth as nicer condenser mics always do. The pattern on the microphone is super cardioid so it only picks up what is straight in front of it and nothing else. That also makes it good for someone using this for something like podcasting or trying to record in a noisy room because you mostly only hear what the mic is pointing at and nothing else. It comes with a long USB cable that you can use to plug it into your computer. You don't need any preamps or converters if you use this mic, so it's a great first mic to get if you want to start recording with your computer.

I bought this microphone a few years ago. It was recommended to me for a first mic when I was trying to get into computer recording. It was really easy to set up and start using, which is a relief because audio can be so complicated. Thankfully the mic also comes with some free software from Cakewalk that you can use to get started. So you get a great deal on this mic and a lot of value out of it. My complaint is that it doesn't sound really wonderful, but that's okay if you're just starting out. I would get it again as a first mic but I don't use it that much any more.
Did you find this review helpful?yesno
Cookies help us improve performance, enhance user experience and deliver our services. By using our services, you agree to our use of cookies. Find out more.