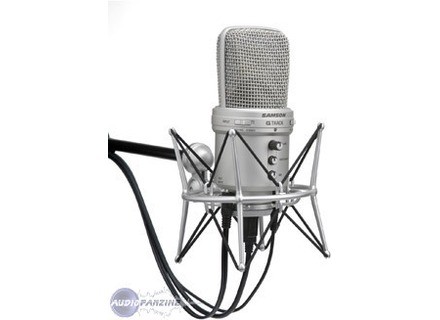 Buy this productView price information >
View other reviews for this product:
This is a really cool piece of technology, not just a microphone. It has a ton of other features housed inside the microphone that make it like 5 products in one. First of all though, it is in fact a large diaphgragm condenser mic. It also has a preamp built in to the microphone itself. So you don't need a separate one to power it. There is also a gain control knob to control how much level you are getting with it. The mic can connect to your computer directly with a USB cable. That is huge because it means you are also getting an analog to digital converter for free in this multi-use tool. There is also a separate input on this mic so you can plug in something that is an instrument or something that is line level. This input is actually in stereo! So if you have a keyboard that has a stereo output and want to get it into your computer, you can do that with this mic. The input can be switched from the mic itself to whatever you have plugged into it. There is still more! You also get a headphone output on the microphone, so you can use it to listen to something to record over without having to get any complicate headphone amplifier setups. The package comes with a desktop stand so you don't need to look elsewhere for a stand. You also can get a shockmount for the mic! Add all these things together and you get a huge value on this discount mic package.

I borrowed this from a friend a while ago when I wanted to do some podcasting and some light recording from my laptop while I was away. This did the trick and then some! With so many features in a small package it's an ideal solution for someone just getting into podcasting or recording with a limited budget. It's very cheap for a lot of features so it's definitely a good value. Very nice product.
Did you find this review helpful?yesno
Cookies help us improve performance, enhance user experience and deliver our services. By using our services, you agree to our use of cookies. Find out more.