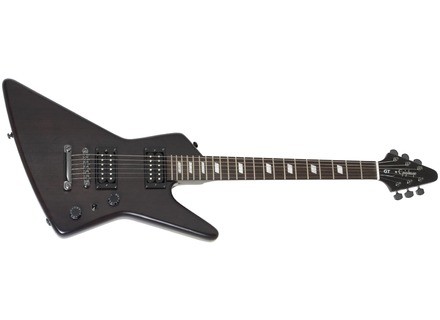 Value For Money : Excellent
In which country was it made? (USA, Japan, Mexico, France ...) It was built in Indonesia I believe How many frets, what kinds of microorganisms and their configuration? Mahogany body with satin finish in a color which is between black and dark red. I&#39;ll stress this point because actually, this satin finish to the advantage of being well done (except for two or three runs) and it was not the impression of having a shovel with a cheap gloss doubtful 22 frets , Slim Taper Neck Bolt, pitch 25.5 (a big plus for this guitar) Two Epiphone humbuckers. The Mechanics have looked a little Cheap What are the settings (volume, tone, micro switch ...)? 3 position selector One volume and one tone especially with Killswitch push / push (A killswitch mutes the guitar signal and thus allows various effects rather impressive) What type of bridge (Floyd, Wilkinson ...)? Tune-O-Matic. I would have preferred a bridge crossing but being accustomed to Floyd, this is a TOM bridge simplicity and efficiency has been ... disconcerting at first. But once we realized that the system bathes all.

The handle is it nice? The neck suits me quite, is quite fine without either compete with a wizard but when you see the baseball bats as the Les Paul or my Iceman ADX-120 is end = Ergonomics Is Good ( in terms of shape, weight ...)? Without doubt the best point on this guitar. I wanted a guitar quite aggressive in visual, without falling into stereotypes BC-Rich and co. I&#39;m not a big fan of Explorer, I find these guitars too massive with a aspect board has sausage. And yet when I saw this little guitar (Yes it is very small, with 60% less area than a standard explore). The shape does not interfere with the game sitting or standing game. The strap fasteners are placed properly and the guitar does not sting the nose. It is also very light (too?) Access to acute (last string) Is it easy? No major problems from this side, it is good without being exceptional Gets it easy to sound good? ... Everything depends on what is meant by good sound. I detail below

Are they suitable for your style of music? I play mainly Metal (Black, Death, Doom) and I play in Drop A given (13-68 I believe). And microphones of origin are not calibrated for such a "mess sound" and distortion as dense. It quickly loses accuracy. The original pickups are a bit feeble for my style. So I changed, I had two dimarzios lying around in a corner, a Humbucker From Hell and a Paf Pro. They&#39;re not microphones oriented Metal and yet the sound is as I expected, from the lower body and tuning in A and the microphones, rather oriented acute allow a good balance of sound, I find myself therefore with its punchy, without being rough, the attacks are clearly apparent. And most of the clean Humbucker From Hell is simply unhealthy and enjoyable to wish for the intros. The guitar is pretty versatile, that is to say that clean sound is very good and the popping sound was as loud as the east too ... According to the nuances between these two sounds, I do not know if the sound can be described as good or bad but that is a personal matter. With what (s) amplifier (s) or effect (s) do you play? I play on a Stack Lunchbox with Pocket Metal Muff: the sound is great as it should. The rating reflects microphones original, not good for my taste but remember we are talking about a shovel has less than 150 €

For how long have you been using it? I use it every day for a month Did you try many other models before getting this one? I have already a lot of differing quality guitars, an Iceman AD 120, a Harley Benton 7-string, an RG. I hesitate between this model and a Jackson RR Series 30 twice more expensive option: half of you made a guitar of equal quality if not better. What thing do you like most/least about it? the +:-shape (L to explore smaller, rounded and silky) - The weight (Easy lift)-ergonomics - THE KILLSWITCH! - The pitch of 25.5 (aprécierez to the problem of body size) and -: The microphones of origin - The weight (and yes, it sounds less) - The handle screwed (screwed but a set neck or through would not have been too much, but it would triple the price of the guitar and again ...)-The mechanical cheap does not inspire confidence, especially with my setup What is your opinion about the value for the price? Excellent workmanship that serious s surprising to find on a guitar so cheap. Beginner or confirmed the try! Knowing what you know now, would you make the same choice? ... Yes yes and thrice yes, if I was afraid of finding myself with a toy, Epiphone has successfully completed a round of master by proposing an update of the well-known form and propose resolutely modern features such as Killswitch or Diapason 25, 5 (AC makes all the difference for me). I think if I had a signature model (you never know), this would be the basis Explorer.
See the source
Did you find this review helpful?yesno
Cookies help us improve performance, enhance user experience and deliver our services. By using our services, you agree to our use of cookies. Find out more.