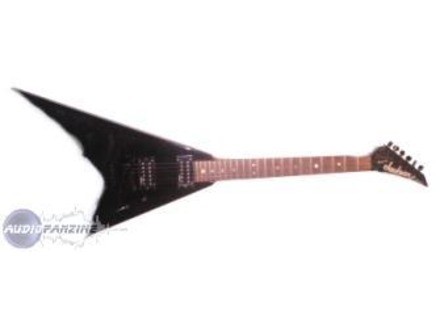 JRR-94, V/XPL/FB Shaped Guitar from Jackson in the Concept series.

View other reviews for this product:
As so well presented in the notice of a hand, a Japanese quality very average.
Note nonetheless that in my case, plus a Super Distortion and PAF Pro one, and electronics redone, it suddenly makes much better.
In any case, there at least, when I change the strings, it goes fast.

Oh là là ... The Jackson Channel ...
A little off course, but flat in the extreme. With this guitar, it goes fast, very fast.
The varnish a little annoying at the slip of an inch, you should clean it regularly, but when it happens, watch out taking up another guitar, you may not be able to move your plans immediately favorites.
It is played with no problems, but only standing. Sitting, it is imperative the angled jack, and balancing is precarious, is standing or not.
The access to treble is more than adequate and provides a slight pull some stunts.
When getting a good sound, of course, and even more obviously with DiMarzio, but only rock and metal.
Pull free of the HB does not allow you to play the Gilmour.
Still, all sounds are accessed Rock for a reasonable price with the original pickups, and with excellent micro devinennet higher.

The style of music here ranges from very very Rock Rock
She has the face that goes well, a stage animal.
She accompanied me during many concerts and has always ensured.
With the original pickups, the sound lacks punch and a lot of details, even if in a tinkering with effects correct, it has its way.
With Di Marzio, is a simple killing. Brutal guitar makes the microphones correctly what gives. Sustain even become better than acceptable. Lack of the Floyd Rose will certainly prevent the playing Guitar Hero, but the super-speed Solos Death to the Murphy and rhythmic overwhelming you will be there.
Of course, we do not talk about Jazz, Reggae or anything else that requires a setting in "V" on its equalizer

Then a 8 / 10 when talking about big sound. Its appearance is beyond tradition, it deserves to be taken into account so we understand better by looking
Update: Now Featuring the config "Dimebag" (SH-1 in neck and SH-13 Bridge) ... It's hard! This guitar sounded a little too serious, now slice it!

A guitar with low end prices to match.
You pay just the brand and a little face.
Originally, it remains fun to play, but electronics is too feeble: poorly made welds, microphones correct but "hollow", not pull.
However, with Di Marzio and welds redone, it provides much more than expected. The leap is huge. So an average score of 5 / 10 original and 7 / 10 with Di Marzio.
Then after a problem arises: Huen RR 94 Super Distortion + 1 + 1 = PAF Pro Price of a new Lag!

Well, ok, the GAL, it will be the base model and it will change the pickups as it some time or another. But not having tried it, is that the model Lag Lags floyd with microphones do not already sounds better than a RR with my Di Marzio?
For metal, certainly not for one who seeks versatility, certainly yes.

We're going to buy a guitar to his mouth mainly. I love to die, she ccompagnée on all roads for many years. (1995) ... But for 3 years, I wrong with my Roxanne and could never go back.

Update: With SH-1 Neck and SH-13 Bridge, from small condos to stabilize the sound and a push pull to split, it sounds strange ... Well And not just in the violent, which makes it all really very surprising. It can sound more violent and extreme as Roxanne and my left is not clear where the sounds are really splits, without reaching the quality of my LAG, very "Fenderiens". Very pleasantly surprised.