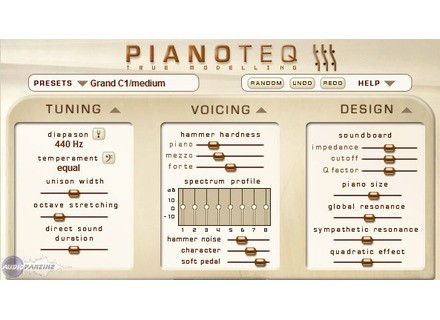 
7 user reviews
Find it in the classifieds starting at $69 Avg used price: $69

View other reviews for this product:
- How long have you use it?

Purchased at the group buy after using the demo version
What is so special that you like most and least?

The game ... dynamics realistic ... without frustration .... answering fingers and almost eye! Made to measure the steinmaha via faziodenfer by setting convincing many parameters ... effective. a velocity curve that fits your game, with great accuracy and realism. No more worries in concerts, the cracks ... the great silences plops ... .... and the remarks of friends amused

Hohner clavinet of T Boesendorfer in concert (the wood), to the reel:
Yamaha C3, C6 and the virtual: Galaxy Steinway, Synthogy ...
How would you rate the quality / price

I waited as some of us out announced in January 2007, media attention and enticing a competitor's "real piano". After some tests the sentence fell: I reduced my hard drive not seuleument a demo version, but also much heavier in bookstores gigas ... Pianoteq ... small but tough!
See the source
Did you find this review helpful?yesno
Cookies help us improve performance, enhance user experience and deliver our services. By using our services, you agree to our use of cookies. Find out more.