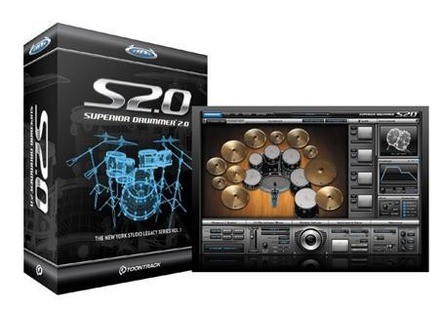 View other reviews for this product:
The Toontrack Superior Drummer 2.0 installed on my computer running Windows XP without any problems. It ran very well and never crashed or gave me any sorts of glitches or issues. I have also used it on a Windows 7 and Windows Vista computer and it ran just as fine on those. It can also be used on a Mac too! All of the drum samples are recorded at high quality studios by Pat Thrall and Neil Dorfsman who are well known in this field.

I have used Superior Drummer 2.0 in Logic, FL Studio, Ableton Live and Cubase. It runs pretty much the same in all applications and does not use too much CPU. I can even combine all of my sound libraries from Superior and EZDrummer together no matter which version I have.

The sounds are pretty good; the quality of them is amazing I just wish it would have come with some more versatile kits. I also feel like the price of Superior Drummer 2.0 is a little too expensive. Paying this amount of money I expected a lot more from ToonTrack. I have a U control MIDI controller that I use to play the drum samples with through my DAW and it works great. I do love using this program for drum patterns as well because there are some really good ones and I also love the fills that it has with it. I have used other plug ins that are virtually the same as this one. Superior Drummer 2.0 doesn’t stick out to me nor do I think it is better than other drum sample based programs. If it was a little cheaper I would think a lot more highly of it. But all in all, it does have some good sounds and kits that have been very useful for me. I have been using it for months now and so far I am satisfied.
Did you find this review helpful?yesno
Cookies help us improve performance, enhance user experience and deliver our services. By using our services, you agree to our use of cookies. Find out more.